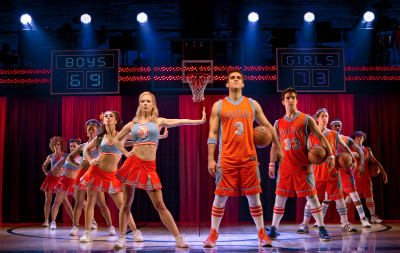 The cast of LYSISTRATA JONES. Photo from lysistratajones.com.

BOTTOM LINE: Inconsistent but not terrible, it epitomizes off-Broadway hitting the bigtime.

To properly review Lysistrata Jones means double-duty for the critic — it is not one musical, but two. What follows are the reviews for the double header now at the Walter Kerr Theatre.

The first play of the evening occurs before intermission. Framing itself around Aristophanes’ Lysistrata, nodding to Greek theatre traditions with a processional entrance, and proudly joking that they can do as they please with their source since it’s public domain, the show proceeds to do just that. Candy colored, brightly lit visuals paired with forgettable pop-pastiche songs and often unintelligible lyrics bring to mind an episode of Glee. But instead of a conflict of high school club pecking orders, it is a losing college basketball team butting heads with their newly-minted cheerleading squad of girlfriends, headed up by Lyssie J (Patti Murin). Named for her Greek forbear by parents “on the fringes of society…they were theater majors,” Lyssie reads some Aristophanes Sparknotes (really) at the behest of quirky feminist Robin (Lindsay Nicole Chambers) and decides it is her destiny to make the team win by getting the cheerleaders to withhold sex. The script then attempts to be about sex without actually using the word “sex.” Instead, we get a song about “giving it up,” implying that sex is something they give to boys, despite their claims of enjoyment (“Why would I stop doing something I actually like for something I don’t care about?” asks one of the girls).

Given too little attention is the fact that Lysistrata really wants to see something through for once, to not give up on herself, a play on words that is the source of the rather unfortunate choice of euphemism. This detachment from their sexuality, paired with their squeaky-clean behavior in spite of bare midriffs and tiny shorts, is reinforced when the girls hit a brothel to get tips from a prostitute (Hetaira, the choral narrator and sometime madam, brought to us by the consistently enjoyable Liz Mikel) on how to make the boys want sex instead of being contented with losing games and internet porn (Her suggestion: Wear a short skirt and run away.) So, a handful of girls whose protests of celibacy are unconvincing can only learn from a whore to embrace their sexualities? It’s no wonder that, with that hyper-sanitized viewpoint, the plan fails, and removing all the raunch and comedy from what Aristophanes wrote results in something pretty depressing. It’s also a lot harder to get someone to start doing something, like winning a basketball game, than to stop something, like the Peloponnesian war, even with the power of the “almighty punani,” as Robin names it (Lyssie: “Isn’t that a really flat sandwich?”). Only our heroine stands strong in her convictions when the curtain comes down, and even she wonders as much as the audience where we go from there.

After intermission, a second play picks up where the first left off. No longer held back by the attempt to adapt Lysistrata, this is an original piece about not giving up, letting go of whatever holds you back, and that your true self is your best self. Lyssie’s struggle to find herself puts her in the arms of likeminded liberal activist Xander (Jason Tam) who had next to nothing to do before intermission but shines as an unlikely leading man in this half of the show. To that end, we get to hear from several other characters besides Lyssie and her team captain-boyfriend Mick (Josh Segarra). The comedy begins anew, and a few really great scenes where the girls try to win back their men through earnestness –  and maybe a bed trick or two – yield great performances, particularly from LaQuet Sharnell as the clever Myrrhine, masquerading as the hip-hop ho her man always claimed he wanted (spoiler alert: It’s not all it’s cracked up to be). Mick learns he isn’t a meathead after all when some poetic sparks fly between himself and Robin, and his song “When She Smiles” is both one of the loveliest in the show and loveliest that I’ve heard in a while. All in all, act 2 is a stronger piece, the characters more sympathetic, the direction more inclined to development rather than referencing pop culture, and by the climactic final game (oh, right, it’s about basketball!) we’re all on the edge of our seats hoping for a happy ending because we don’t want to give up on these kids either.

The inconsistent tendencies in Lysistrata Jones are where the main disappointment lies. The entire cast are incredible dancers (due credit to director/choreographer  Dan Knechtges) and there are a few standout performances. Chambers is a formidable comedienne whose Robin steals nearly every scene she is in, Mikel’s Hetaira is a strong singer and actress and a welcome thread of dependability besides, and Murin in the title role has downright joyful chemistry with Tam’s Xander in a second act number that brings to mind “On the Right Track” in Pippin, a moment that has always left a big smile on my face, as did this one.  All in all, it feels a little too rough for a Broadway stage, a little held back by its adaptation, and sometimes like an early draft of something that could have been better. That said, the play ends on an extremely high note, a gold-drenched homage to the bacchanalia of their inspiration’s day that generates smiles throughout the crowd. Whenever that happens, there is always a measure of success.

(Lysistrata Jones plays at the Walter Kerr Theatre, 219 West 48th Street. Performances are Tuesdays at 7PM; Wednesdays at 2PM and 7PM; Thursdays at 7PM; Fridays at 8PM; Saturdays at 2PM and 8PM; and Sundays at 3PM. Tickets are $25-$130 and are available at telecharge.com or by calling 800.432.7250. For more show information visit lysistratajones.com.)