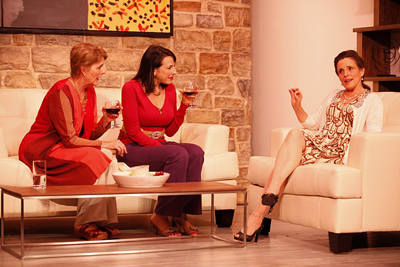 BOTTOM LINE: A sometimes amusing but not very deep play about how much more important loving and honest relationships can be than material goods.

“What shall it profit a man, if he shall gain the whole world, and lose his own soul?” That’s the biblical injunction but a similar secular version of that idea appears in Greek mythology as well, in the story of King Midas, whose ability to turn everything he touched into gold proved to be a curse rather than a blessing. Or in everyday terms: “Money can’t buy happiness.”  And it is a similar message that animates Kithless in Paradise by Molly Moroney, now enjoying its world premiere at Theatre Row’s Lion Theatre: to wit, there are more important things in life than material goods.

Kithless in Paradise is set in San Francisco in 2009 at the home of Tim and Janice McCall (David Wirth and Liz Forst), who are hosting a dinner party for their house guests, Phil and Polly Barrett (Brit Herring and Tracy Newirth) who are visiting from New York. Tim, a successful money manager, and Phil, who is now very comfortably retired, are in their fifties and have been best friends since their high school days, even before they were classmates at Notre Dame. After graduating from college, Phil became Tim’s first client, engaging him to manage his $20 million portfolio -- an act which launched Tim on his successful career.

Also in attendance at the dinner party are Ken Loring (Bob Manus), who Tim and Phil have also known since their high school days, and his wife Sandy (Jill Melanie Wirth). If anything, Ken appears to be even wealthier than Tim and Phil, residing in a $25 million mansion overlooking the Pacific Ocean. But Tim and Phil are certainly well enough off themselves, drinking $3,000 bottles of Bordeaux, driving Mercedes Benz, and belonging to all the right clubs.

Not that everything is perfect, not by a long shot. Both Tim and Phil went through a difficult stretch during the early stages of the financial crisis over the prior two years and that did put something of a strain on their relationship, although they and their friendship managed to survive it. But a much more serious problem, it would seem, is the fact that Sandy is suffering from leukemia and may not have much longer to live.

One might imagine that Sandy’s leukemia would be the equivalent of an 800 pound gorilla in the room but, oddly enough, that doesn’t turn out to be the case at all. Not only Janice and Polly, but even Sandy, herself, remain more concerned with talk of shopping for expensive shoes and handbags and imbibing outrageously expensive wine than with the state of Sandy’s health. As for Phil, Tim and Ken, their focus remains firmly on such macho matters as cars, sports, bodybuilding and money. In sum, the shallowness of the entire group knows no bounds.

Of course, as the dinner party wears on, secrets are disclosed and revelations made, which is just what we’ve come to expect from plays of this sort. Spousal infidelities and the betrayals of friends come to light but it all develops in a most predictable manner. Yes, there are revelations and secrets disclosed but there are no real surprises and nothing earth-shattering occurs.

The play is written, directed and acted well enough and it does have its entertaining moments. But while it succeeds in displaying the shallowness and one-dimensionality of all six characters portrayed and telegraphing its platitudinous message that love, marital fidelity, friendship, health and life itself are more important than material goods, this is not a deep play and it achieves its goals only by lapsing into the very shallowness and one-dimensionality of the characters in the play itself.

(Kithless in Paradise plays at Theatre Row’s Lion Theatre, 410 West 42nd Street between 9th and 10th Avenues, through October 9, 2011. Performances are Tuesdays at 7PM, Wednesdays through Fridays at 8PM, Saturdays at 2PM and 8PM, and Sundays at 2PM. Tickets are $51.25 and can be purchased at telecharge.com or by calling 212.239.6200.  For additional information, visit kithlessinparadise.com.)