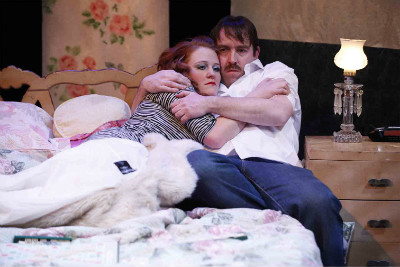 BOTTOM LINE: A comical tale about two misfits’ disastrous seaside getaway, which in spite of its intent is rarely more than superficial.

Picture for a minute a middle-aged man still living with his mother. Someone whose sexual fantasy involves Betty Rubble (yes, the wife of Barny in The Flintstones) and who recites the complete line up of his favorite soccer team while nearing sexual climax. Add to this already daunting image a slap of social ineptitude and the inability to stay quiet for more than a few seconds and you have Eddie, the anti-hero and main character in Kissing Sid James, the new play presented at 59E59 Theaters as part of its 2011 Brits Off-Broadway festival. Eddie (Alan Drake), is simply put, one of the most awkward human beings alive. He has, however, managed to conjure up enough courage to invite Crystal (Charlotte McKinney), a tarty croupier he has met at his local casino, on a romantic weekend to a British seaside town. But as you can imagine, the weekend does not turn out like either of them had planned, and instead we are presented with a funny tale of misadventures, petit arguments and sexual mishaps. Add this to the poignant northern English accents and a strong repertoire of British slang (they must run the entire gamut, including classics such as “tosspot” and “wanker”) and you’ll be assured plenty of laughs throughout.

By the opening telephone dialogue we know that both Eddie and Crystal barely know each other and have ultimately agreed to go away together in the hope that the weekend will add some dazzle to their otherwise monotonous and unexciting lives. However, it becomes immediately apparent as they arrive to their hotel room that there is a complete lack of chemistry between the two. He is insecure, uncomfortable with silence, and extremely shy, while she is overly coquettish, fantasizes with being swept away by a rejuvenated Sean Connery and has a wild zeal for life as a consequence of 10 wasted years in a meaningless marriage. This recipe for disaster is further enhanced by the fact that their idyllic sea ide town becomes the target of the inclemency of the British weather, confining our odd couple to their tacky room for almost the entire weekend.

The small Theater C at 59E59 is set-up in the black box style, decorated only with the kitschy furniture that comprises the hotel bedroom. It is a wonderfully intimate setting which enhances the way in which the play slowly exposes a deeper layer to the characters, depicting their vulnerability and ultimately their loneliness. Drake does a phenomenal job being Eddie, giving us an array of farcical moments which will have you giggling away or rather holding your head in your hands in disbelief. He does equally well embodying the more vulnerable side of Eddie as well as his moments of injured pride. McKinney is just as convincing as Crystal, whimsical, full of spark yet lonely and yearning for affection.

Much like the lovemaking scene between the two, the climax of the play is somewhat disappointing. While the writer Robert Farquhar does well framing the farcical elements of the play and showing the quirkiness of our characters, the result is not as good when trying to deliver depth to their personalities. At times the production seems predictable, sometimes unrealistic and almost always a little superficial. But taken at face value, Kissing Sid James is an intimate and entertaining play that will have you laughing for long lengths of the show. And if you’re anything like me, you’ll enjoy hearing a British accent that isn’t as posh as Hugh Grant’s.