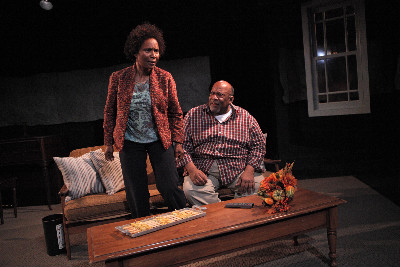 BOTTOM LINE: A realistic view into the way tragedy can affect parenthood and the individual roads to healing -- with a great dose of comedy

Julius by Design is the first production by Fulcrum Theater, a new program which tries to address the low representation of playwrights of color in the New York theatre scene by offering a space in which they can write and produce their own plays. An interesting statistic led to their mission: while approximately 55% of the city’s population is considered of color, in the decade leading to 2009 the percentage of the city’s plays produced by people of color fluctuated only from 6-17% (go to fulcrumtheater.org to learn more). Kara Lee Corthorn’s work thus constitutes the first fruits of the program with Julius by Design, a sometimes tragic, sometimes comedic but always engaging production at the Access Theatre.

The play is centered mostly in the living room of Jo and Laurel (played by Suzanne Douglas and Mike Hodge), a married couple facing the tragedy of the murder of their sixteen year old son Julius at the hands of another young man in a foiled burglary attempt. Although seven years have passed since the terrible incident, the couple’s interaction indicates that they are still striving to deal with the tragedy and that the wounds are far from healed. Jo, a former high school English teacher, fills her time writing letters to Pulitzer Prize winners and other literary celebrities who rarely respond.  Laurel just sits on the sofa doing crosswords and has a recurring dream where his son Julius keeps arriving home at night to watch TV beside him on the sofa. Their otherwise lonely Thanksgiving is severely disrupted when a letter arrives from jail from their son’s repentant murderer Ethan (Johnny Ramey, who also plays Julius). This sets off a secret correspondence between Jo and Ethan, which is skillfully played out as intermittent conversations between the two on stage. The story is complemented by a set of three rather socially inept characters, George (Crystal Finn) a makeshift door-to-door saleswoman who was secretly in love with Julius, and Casey and Max (Christianna Nelson and Curran Conor) an awkward but endearing couple who Jo and Laurel have met in their grief therapy group and who have lost a baby daughter by a stray bullet. The play focuses on the interactions between these characters, and the way each seeks a certain healing from the personal suffering of their circumstances.

Three things make this play truly enjoyable: the great writing, the talented acting and the way Corthron manages to make comedy a big part of the play while still moving us with the pain and suffering that all these characters are going through. While George, Casey and Max are quite artificial characters (although the actors do as good a job as the characters allow), Jo and Laurel constitute rather complex and unpredictable personalities. Suzanne Douglas’ portrayal of Jo is remarkable, personifying apparent submissiveness and an untiring chatter over mostly irrelevant matters, to demonstrating a strong willed and assertive manner that will lead her to challenge her husband’s anger at her correspondence with Ethan and to pour gravy on her husband’s head after tolerating a little too much of his mockery. While there are many hilarious moments in this play, it still manages to describe, in what I thought was a very credible way, the effects a tragedy such as this can have on a couple’s relationship. Jo and Laurel are not united in their intent to overcome their grief, but rather they try to find solace individually (sometimes in irrational ways) while being incapable of supporting and helping one another. Laurel is continuously aggravated at Jo’s mindless chatter and her inexplicable tendency to correspond with unknown authors; meanwhile Jo receives no healing from Laurel’s insensitive attitude and lack of empathy.

Overall, I really enjoyed the play, which has a good mix of complexity of character, hilarious moments and some depth in its themes. It also has a certain dynamism which stems from the fact that the narrative is not at all linear or predictable, so at the end of each of the scenes I really didn’t know what to expect in the next one. While there is an imbalance to the credibility of some of the characters, overall Julius by Design is a realistic look into the effects of tragedy in the lives of parents, for which I commend Fulcrum on their inaugural show.

(Julius by Design, presented by Fulcrum Theater, runs through July 24, 2011 at the Access Theatre, 380 Broadway. Performances are Wednesdays through Saturdays at 8PM and Sundays at 7PM. Tickets are $18, available at Smarttix by calling 212.868.4444 or visiting smarttix.com.)