Available by calling 212.244.7529 or going to tickets.signaturetheatre.org 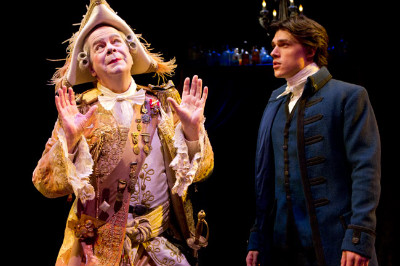 Peter Bartlett and Finn Wittrock in The Illusion. Photo by Joan Marcus and courtesy of signaturetheatre.org.

BOTTOM LINE: A lively, delectably decorated romp of a production with more amusing moments than stale ones.

Being lauded as Tony Kushner’s "most theatrical play," The Illusion has plenty to live up to, especially considering Kushner has made a name for himself by imbuing his boisterously theatrical pieces with ample bite and resonance. This free adaptation of Pierre Corneille’s poke at Neoclassicism is indeed highly theatrical, though cannot and should not be categorized with Kushner’s other work. Now playing at Signature Theatre’s Peter Norton Space, The Illusion offers more gum than teeth, though does so pleasantly enough.

One clammy French evening finds a remorseful, aging lawyer in a sorceress’s cave, hoping to discover what’s become of the son he banished many years prior. Though the man is unable to offer much of a satisfactory answer regarding his reason for forcing his son away, the sorceress agrees to conjure up images of the boy’s life for the old man to view, and the two clear the stage for these memories to unfold before them on the ornate cave’s walls. The handsome and wily man’s son is shown to have quickly found new interests post-banishment - particularly in the form of a rich maiden and her lady servant. Wooing and winning them both (unbeknownst to the maiden, of course) this same scenario plays out in two different settings, with the boy and his two ladies changing name, attire and location, though not plot line. Though the old man takes offense at this inaccuracy of the sorceress’s conjuring, he quickly resumes watching as the scene unfolds. The fraught love story ends badly for all involved, leaving the old man more sorry than when he arrived. All is not lost, however, and the sorceress reveals a slight loophole in the dismal outcome of the visions, as well as her hefty price-tag for the effort, before sending the old man on his way with pockets and spirits commensurately lightened.

Though hitting the main points regarding relationships of fathers and children as well as lovers and mistresses more than a few times, this somewhat cautionary tale boils down to a simple assertion about human emotion: feeling lords over all. It dictates every moment of every life and is able to bring truth to pure artifice, and doubt to even the most tangible certainty. And as we’re ruled by the constant palpitation of emotion, even the smallest and least seemingly significant moments can be of powerful importance should those feelings tell us so. In this, Kushner and Corneille make quite a fine case for theatre’s cause – if an evening of such spectacle has stirred those vitals, simply enjoy it, because what are we but our emotions?  What is more real than flushed cheeks and quickened breath?

This charming though slightly too-lengthy production offers delight to those with a keen eye and ear for the sumptuous. Kusher’s adaptation has done well working within Corneille’s framework (and its own breed of pushing the limits of the Neoclassical structure he struggled to work within), with updated language that flits amusingly between classical and colloquial, melding seamlessly. Even Corneille’s notorious distaste for the classics has been retained, with little barbs thrown here and there throughout the script. Susan Hilferty’s splendid costumes and Christine Jones’s spare but rich (and often cleverly useful) set play off each other beautifully.

The actors, too, dutifully uphold their parts, though are all overshadowed by the boy’s employer in the second vision. Matamore, a decaying fop, stripped of youthful vigor but still fit to burst with hot air, steals the show with his clownish and heartbreaking bravado. Peter Bartlett’s foolish but tender Matamore truly epitomizes the man ruled by his emotions; feeling that he is a great warrior and sought after lover is all that matters to him, despite the world’s reality attempting to dissuade him. Bartlett’s passionate characterization makes Matamore difficult not to love, despite his manifold ineptitudes.

All in all, this fairly fluffy piece leaves room for more than mere purging laughter, though The Illusion also happily and boldly proclaims the value of simple enjoyment as a valuable take-away in itself.