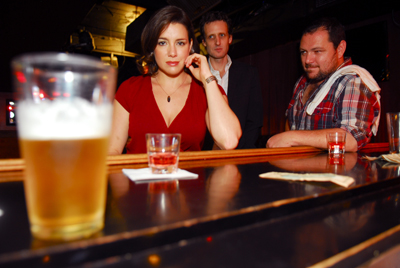 Catia Ojeda, Ean Sheehy, and Matt Kalman in IT IS DONE. Photo by Jen Maufrais Kelly.

BOTTOM LINE: Dinner theater in a bar with a story that carries a big twist.

To my knowledge, dinner theatre isn't usually edgy and bold, and there isn't usually booze, and it isn't staged in a bar. Among the theatres of Broadway sits a pub called The Mean Fiddler, where It Is Done, a new play by Alex Goldberg, offers exactly this type of theatre. It's a very cool experience and a bargain compared to the other theatres on the block.

It all starts with the bar itself. Guests are ushered downstairs to a room with bar tables and private bar. It reminds me of a friend’s suburban basement with wood paneling and Christmas lights lining the ceiling -- very cozy and "American" in spirit. There is even a jukebox playing Hank Williams Jr. and other country songs in one corner. I enjoyed my complimentary drink (comes with the ticket) and found a table to join as showtime came closer. Had I gotten there earlier (doors open at 6:30PM) I would have ordered food. Some of the entrees and appetizers I saw floating around were very tempting. As the last dishes were handed out the bartender announced the show would be starting and he took his exit.

Then the show began.

Jonas (Ean Sheehy) enters the room from the entrance of the bar. A howling wind is heard outside and the bar is empty except for the barkeep, Hank (Matt Kalman) who has been dodging a ringing phone. Banter between the two takes place and for the most part the story plays as true to life as possible. It’s fun to watch the actors transform a space that the audience was just using into a story that is engaging to watch. Ruby (Catia Ojeda) enters as a broken down traveler who is also stuck in the wind storm. Drinks are ordered, games are played and the theatrics continue.

For a long chunk of time the play is more of a slice of life experience. The characters interact with each other and the play seems to be about two stuck travelers having drinks and conversation in a bar. I did not tire of this, but part of me wondered where it was all going.

Then came the twist.

It was out of nowhere and took me completely by surprise. The play took on a new dimension and hooked me through the end. Without giving too much away, be warned that its subject matter that is a little scary. It is a thrilling ride from the twist until the end and it does play with your mind. The play becomes about something bigger than the bar in which it is staged, but the bar actually becomes a bigger part of the show. The technical design starts to play with the audience in subtle and not-so-subtle ways that really add to the gravity of the experience.

The acting is excellent. Kalman plays his comic relief role with great success -- Hank appeared at the right times and had his interjections nailed. Ojeda plays Ruby with a sharpness that was more fun to watch as her character developed. Sheehy play Jonas with a vulnerability and desperateness that had me rooting for him as the story played out. All of the characters feel very real and this is due to both the performances as well as Goldberg's writing. Goldberg has created very three dimensional characters, that when portrayed with skilled actors become very much alive on stage.

Ultimately, the story is what makes It Is Done such a successful show. The bar is neat and director Tom Wojtunik does a great job incorporating the setting into the play itself, but all would be lost if the story itself wasn’t any good. Goldberg has written a smart script that entertains from start to finish. I’d honestly go see the show again -- it’s a fantastic outing for any New York theatergoer and perfect for a date or an evening with friends. There is quality throughout this production and I highly recommend you check it out.