Discount tickets can also be found on TDF for members, or by using code FACE. 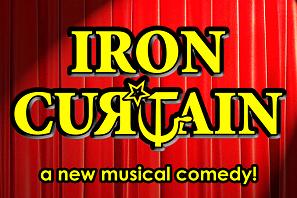 BOTTOM LINE: Iron Curtain is a hilarious, fun musical comedy about showbiz, Soviets, and the sentimental side.

What’s better than a good old-fashioned 1950s musical? How about a musical ABOUT good old fashioned 1950s musicals! Iron Curtain captures the same charm and charisma of that warmer time in this singing romp about a down-and-out American songwriting team who are kidnapped by the Soviets and taken to Moscow to fix “the world’s worst propaganda musical.” It’s a little like The Producers meets Sunset Boulevard (but without Nathan Lane dressed as Norma Desmond).

Written by Susan DiLallo, Stephen Weiner, and Peter Mills, Prospect Theater Company first became involved with Iron Curtain in 2005 when they began to develop the script toward a production. The original 2006 mounting was awarded Best Production of a Musical by ITA. Since then, Iron Curtain had been reincarnated at the Edinburgh Fringe Festival and in Issaquah, WA, and now Prospect Theater Company is bringing it back for an off Broadway run directed by Cara Reichel and choreographed by Christine O’Grady.

Heading this outstanding cast is Broadway notable Jenn Gambatese (Tarzan, All Shook Up, A Year with Frog and Toad) as a diamond in the ruff Rusky. She begins Iron Curtain as a potato-farmer-turned-chorus-girl then becomes a star and more! Gambatese lends her signature sparkle to the irresistible Masha and benefits the role with her appealing comedy and sweet voice.

Todd Alan Johnson and David Perlman make a delightful duo as the writing team Katz and Finkel, infusing these “loveable losers” with a mix of Odd Couple and Abbott and Costello, plus their rich chemistry. Like the men they portray, Johnson and Perlman complement one another perfectly. The two actors also lend their personal charisma to these otherwise hapless characters and win the audience from moment one. Johnson could make a porcupine seem cuddly, and Perlman matches his dulcet voice with an irresistible joviality.

The favorite for me, however, is Bobbi Kotula as avant-garde directress Hildret Heinz. Imagine a German Nancy Grace but with talent and a penchant for bondage. The vibrant Kotula fills the stage, and performs songs and comedy alike with a full visceral and vocal prowess. Nancy Opel watch out!

The ensemble all shine brightest in their bit parts, particularly the uproariously funny Andrea McCullough who can make carrying a prop offstage funny. Robby Sharpe also kills in the parallel characters of travel agent and border guard. When all of these talented actors come together as a chorus, however, the result isn’t always as strong. Some of the production numbers seem under rehearsed and less lively than when performers are in individual parts.

Admittedly, the set and production values could have used some more money thrown their way, but it’s all cleverly construed and used by Brian Prather and Reichel. And costumer Sidney Shannon takes full advantage of the hilarious opportunities afforded by the script.

As far as theatres go, the Baruch Performing Arts Center is off the beaten path. Located on 25th Street between Lexington and Third Avenues, it’s already unexpected, but to get to the theatre itself you must first enter the imposing complex, check in through security, and then take an elevator down to Basement 3. This actually isn’t as difficult as it initially seems, but I would still recommend an extra ten minutes travel time.

As a whole, Iron Curtain is a big success, just like Katz and Finkel always wanted. The audiences laugh, the cast quips, and nobody has had so much fun with a Russian accent since Sigourney Weaver’s work in Heartbreakers. As a feel-good musical, it works.

(Iron Curtain plays at Baruch Performing Arts Center, East 25th Street between Lexington and Third Avenues, through November 27, 2011. Performances are Tuesdays and Wednesdays at 7:30PM, Thursdays, Fridays, and Saturdays at 8PM, and Sundays at 3PM. There are added performances November 19th at 3PM, November 21st at 7:30PM, and November 26th at  PM. There are no performances November 23rd or 24th. Tickets are $50 ($65 for premium tickets) and are available at www.prospecttheater.org or by calling 212.352.3101.)