By Jonas Hassen Khemiri, Translated from Swedish by Rachel Willson-Broyles
Directed by Erica Schmidt
Produced by The Play Company 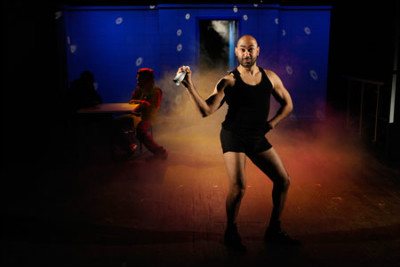 BOTTOM LINE: A provocative mix of humor and pathos about what it means to be The Other told from numerous divergent perspectives.

Jonas Hassen Khemiri’s Invasion!, winner of a 2011 Obie award for playwriting, looks at The Other—in this case someone or something called Abulkasem—from a kaleidoscopic array of perspectives. Indeed, as the frenetic and often hilarious play unfolds, it becomes apparent that he or she is many things to many people: A bold planner of terrorist assaults; a lonely heterosexual man in a bar; a gay Egyptian who dreams of moving to America and becoming a dancer; and an apple picker working in upstate New York for a paltry $2.50 an hour. Or maybe Abulkasem isn’t even human. Perhaps the word is akin to other magical phrases—terms like shazzam, abracadabra, or wah-lah—and can be used as noun, verb, adjective, or adverb to manipulate whatever emotional response needs revving up.

If it sounds confusing, it is—and it isn’t. Either way, it doesn’t much matter. What matters is that audience members get a taste of the chicanery and chaos that have exacerbated racism and ramped up fear and loathing of the mythical Abulkasem, not just in the United States but throughout the West.

The four actors in Invasion!—Francis Benhamou, Nick Choksi, Andrew Ramcharan Guilarte, and Bobby Moreno—are for the most part brilliant in evoking the paranoia that has dominated politics since September 11, 2001. Their timing is impeccable as they seamlessly move from persona to persona and, while some of the accents need work, the overall effect captures the social realities and uncertainties that have marked the decade since Al Qaeda’s planes flew into the Twin Towers and the Pentagon.

One of the most moving scenes in the play involves Guilarte speaking Arabic while an Arabic-to-English translator, played by Benhamou, is slowly revealed to be distorting what he is saying. Guilarte’s allegedly anti-Semitic rant becomes almost unbearable once viewers realize that he is hapless, with no way to know the extent to which he is being played. Bobby Moreno is similarly riveting in a closing monologue in which he describes seeing a presumably undocumented worker intentionally burning his hands to make fingerprinting impossible.

If Invasion! sounds heavy, it is, but rest assured that every gut-wrench is offset by laugh-out-loud humor. Academic scholars, AKA The Panel of Experts—men and women who have made a career of studying the elusive Abulkasem—are particularly hilarious. So are scenes in which Choksi, portraying a nerdy Pakistani immigrant, decides to start calling himself Abulkasem in an effort to enhance his chances with the ladies.

Courageous and timely, Invasion! has already taken Austria, France, Germany, Norway, Sweden, and the United Kingdom by storm. This second New York run, timed to coincide with the tenth anniversary of September 11th, is provocative, entertaining, and open to interpretation.

In fact, as the curtain closes viewers are left to decide for themselves who Abulkasem is, or if she/he/it is simply a politician’s wet dream or the figment of an all-too-vivid collective imagination. What’s more, it subtly—by implication—warns that the outcomes will be vastly different depending on how we answer this important query. As New Yorkers we’re constantly told to say something if we see something. Invasion! raises the ante by pushing us to ascertain what—or who—we’re actually looking for.

(Invasion! runs through October 1, 2011. Performances are held at The Flea Theater, 41 White Street, between Church Avenue and Broadway, Mondays through Fridays at 7 PM. and Saturdays at 3 PM and 7 PM. General admission is $30; premium reserved seats are $40. To buy tickets call 212.352.3101 or go to www.playco.org.)