How and Why I Robbed My First Cheese Store 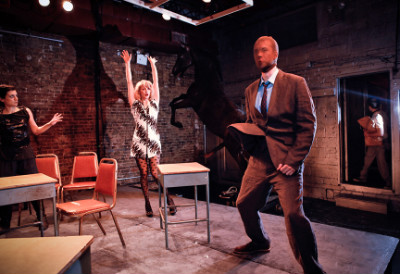 Mary Notari, Melody Bates, Joe Mullen in How and Why I Robbed My First Cheese Store. Photo by Benjamin Gustafsson.

Anyone who has spent any time within the theater world will know how prevalent egotism can be. How and Why I Robbed My First Cheese Store, by downtown theater veteran Mike Gorman seeks to poke fun at and dismantle the pretension that makes the theater industry often so unwelcome to outsiders. One can perhaps guess that Gorman himself encountered the very same unfriendly attitudes that greet the character Jim (Joe Mullen), a young would-be playwright who brings his script to The Mad Horse Theater Company in hopes getting it staged. Rather than considering him to be a potential new talent, the four members of the theater company find him to be laughably endearing. Devon (Alan B. Netherton), the overtly pedantic artistic director, leaves Jim’s script unread on the floor of his office and arranges for him to attend a dinner in which he will be offered the menial position of “poster coordinator.”

Each member of the theater company is so overly attached to their job title that it acts as a complete summary of their being, a basis for all their self-worth. Devon ruminates over a conference he attended earlier that day where his name tag read simply “artistic director.” He ponders over the meaning of the words and his connection to them, showing how inextricably connected his sense of self is to his job title.

Jim however, refuses to play the part of the grateful outsider and points out the over the top pretentiousness of the members of the theater company, poking fun at such aspects as the fact that Loren (Mary Notari), the set designer, goes by the title “environment designer.”  After meeting the company’s resident playwright he wonders whether the only difference between him and an actual playwright is a leather portfolio and a cute black outfit.

Cleverly, each member of the group is shown displaying their theatrical persona by performing a dance number to a song that embodies their outward image and ego (for example, the environment designer appropriately performs a funky shimmy to M.I.A.’s song “Creator"). At the end of the dance number the music cuts out to the sound of stampeding horses, with the member in question fleeing the stage in terror, showing that the personas are slowly being dismantled by Jim. One can fall in love with the idea and image of who they are, while failing to look at themselves realistically or see the similarity between themselves and those who are not as high up on the ladder of success.

Much of the play's laughs can be credited to Bruce, a mentally impaired, formerly homeless man who now functions as a sort of indentured servant to the theater company, bringing them food and attending to their every beck and call. Through Jim’s influence, Bruce stands up against his masters, frightening them to the corners of the room simply by pulling out the crumpled newspapers he keeps stuffed in the crotch of his pants, reading aloud random sports scores. By the end of the play the egos of the theater company have been dismantled, with the artistic director yelling that he is the artistic director because he is in charge and because he walks around with a “big clipboard.”

Claudia (Melody Bates), the ditzy rocker-chick, public relations rep, manages to also steal many scenes with her naïve yet well-intentioned enthusiasm that has her divided between both sides, as she both encourages Jim’s coup d’etat of the company, and also hesitates at its disintegration. Bates portrays the airhead blonde convincingly, without falling into clichés.

For anyone who has been annoyed or victimized by the pretensions of New York’s theater world, How and Why I Robbed My First Cheese Store will function as catharsis, or perhaps just serve to entertain at just how close to home these caricatures land. The play shows how one can fall in love with the idea and image of who they are, failing to look at themselves realistically. This satirical look at the world of theatrical pretensions is wacky and over the top, yet also realistic and close to home in its unflattering examination of those at the top.

(How and Why I Robbed My First Cheese Store played at La Mama Theatre, 74A East 4th Street through Sunday June 5, 2011. More information is available at http://lamama.org/.)