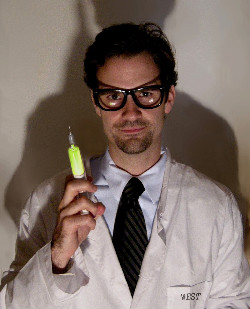 BOTTOM LINE: Shut your eyes tight and pull the covers high for the second annual H.P. Lovecraft Festival, which transports you into the delicious world of weird horror with two adaptations of classic Lovecraft stories, “Call of Cthulhu” and “Reanimator.”

In “Call of Cthulhu,” an inspector and an anthropologist follow the ravings of madmen and cultists to discover an old god is waking from its ancient sleep, leading to an encounter on a secret island. In “Reanimator,” a mad scientist and his assistant bring back the dead from beyond the grave. Zombies ensue.

Horror is kind of a strange genre to stage if its goal is to genuinely scare you. To quote Lovecraft, whom Stephen King believed to be the twentieth century's master of horror, “The oldest and strongest emotion of mankind is fear and the oldest and strongest of fears is fear of the unknown.” But there is nothing “unknown” about a guy in a rubber monster costume; in fact, after the initial surprise of it jumping out at you, it can become quite hokey. As a not-so-closet Lovecraft fan, I’ve seen movies of his stories and they all fail for this reason -- or bad CGI. His monsters are so strange, that to encounter them in real life would likely break your mind, as it does to all of his protagonists, but any recreation of them is really laughable.

Luckily, RadioTheatre avoids this trap to the best of their ability, sticking to what makes horror really great -- the audience's imagination -- and achieving the best translation of Lovecraft to another medium that I’ve seen. Horror always takes place on the fringes of society, in the shadows, in the dark corners of the world. What better place to stage it than in the black recesses of your mind? RadioTheatre’s oeuvre involves staged pulp genre fiction as old time radio shows, with actors voice-acting the scripts into microphones with a few lighting cues, some puffs of the smoke machine for atmosphere and decadently eerie soundscapes, music and sound effects. Strings tremble and groan out the bass notes, a little bit of lightning is accompanied by a strobe of and strange scratching noises and moans abound in the distance.

RadioTheatre sometimes creates its own trap. Watching the actors pantomime shooting a gun or sawing a head from a corpse had a tendency to take me out of the moment. I became keenly aware of two realities taking place at once. The actors are consciously performing on stage -- the social reality as it were -- and the story is being played out in our imaginations -- the artistic reality. Traditional theatre allows these two realities to merge with the suspension of disbelief. However, when I leaned back and shut my eyes, the production achieved this and really came alive. Radio and horror have always taken place in the darkness and the audience should let them; this makes Lovecraft and RadioTheatre a natural fit.

Lovecraft is a victim of his own time. His stories are melodramatic dramas of men driven mad by encounters with horrific beings. If you are looking for subtle realism, you will not find it here. The language, heightened emotion and action are a bit too big for all of that. The actors in this production handle it well, throwing themselves into the luxury of a little overacting, which is necessary for the stories to work. Frank Zilinyi does an excellent job in both of this evening’s offerings as Inspector Legrasse in the first tale and as the narrator in the second. He has a fair amount of experience with RadioTheatre and it shows in his performances. Eric Whitten is no slouch either as Professor Webb and Herbert West respectively, but hits his fever pitch of insanity a little early in each of the stories, leaving little room for the madness to evolve.

As delicious as his stories are, Lovecraft does espouse some dated beliefs, such as traditional black cultures being animalistic and crass heathens in “Call of Cthulhu.” In “Reanimator,” the homoerotic undertones of “Reanimator” are made explicit with a fey affect. Queer theory and horror have always been inextricably linked and often negatively, such as portraying mad scientists’ depravity through homosexual lusts or intimations of necrophilia. For the average playgoer though, these subtexts are not troublesome and they are a product of the source material, not RadioTheatre’s production.

“Call of Cthulhu” is considered to be one of Lovecraft’s best pieces that sprawls piecemeal a little, and RadioTheatre’s adaptation strips it down nicely. “Reanimator” is universally regarded, even by Lovecraft, as one of his worst stories, which was serialized over six episodes. It is noteworthy as one of the first zombie stories, however, which are all the rage these days. RadioTheatre helps it along with a little comedy. All in all, this production offer an enjoyable, unique and creepy evening if you take these stories for what they are.

(The second annual H.P. Lovecraft Festival plays at UNDER St. Marks Theater, 94 St. Marks Place, East 8th Street between 1st Avenue and Avenue A, through September 11, 2011. Performances are Thursdays through Saturdays at 8PM, and Sundays at 3PM. Tickets are $18, and can be purchased through Smarttix at smarttix.com or by calling (212) 868-4444. For more info visit RadioTheatrenyc.com.)