Off Broadway, Musical
Extended through 11.20.11 (will resume spring 2012)
Manhattan Theatre Source, 177 MacDougal Street
NOTE: For the month of October, performances will be at The Duplex, 61 Christopher Street 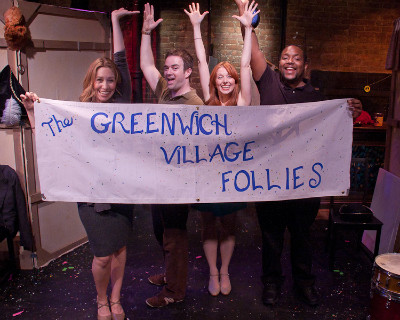 BOTTOM LINE: An entertaining and fun look at 400 years of Greenwich Village history in 80 minutes of song, dance, and comedy.

Ever wonder why the cobblestone streets in New York City’s Greenwich Village are so full of twists and turns — and so different from the rest of the island?

The Greenwich Village Follies has the answer, in a song called “Resist the Grid.” The tune is one of 17 high-energy numbers in the 80-minute Follies, and it reminds audiences that fighting City Hall is a time-honored tradition among Village denizens. To wit: the 1811 declaration that the neighborhood would be razed in favor of square blocks running north from Houston Street. Singer/actor Meghann Dreyfuss — whose fantastic voice and captivating stage presence are a boon to the show — belts out the reaction of local residents: “We like our triangles/No squares in the Village/Here is our identity/ Here is our community.“  Spirited protest, we’re told, forced the City to build the grid around the district, “which is why when you walk west of here you get lost,” she quips.

Funny, charming, and occasionally campy, the 2011 version of The Greenwich Village Follies uses song, dance, and shtick to showcase local lore. Although the full company includes eight performers, the cast of the play features just four on any given night. I saw it with Dreyfuss, Patti Goettlicher, John-Andrew Morrison, and Guy Olivieri (also in the rotating company: Kevin R. Free, Christopher French, Nikki Jenkins, and Alyssa Malgeri). While all are good, Morrison and Dreyfuss are standouts.

The action, with live music performed by Michael Harren and Spencer Cohen, takes the audience from the 1600s to the present. And what a present it is… At a performance held just three days after New York Governor Andrew Cuomo signed a bill sanctioning marriage equality, aka gay marriage, the mood in the Village remains ebullient, and Morrison wasted no time in championing the legislation with cheers, in-your-face flirtation, and even a butt wiggle… Not surprisingly, the 1969 Stonewall Rebellion is also acknowledged and a rousing rendition of “We Are the Stonewall Girls” had the audience hooting and hollering.

Other songs—ranging from the humorous to the mournful — cover additional Village bases, from the horrific 1911 fire at the Triangle Shirtwaist Factory on Greene Street, to slavery, to the conquest of the Lenape Indians by the Dutch and then the British. New York University, owner of much of the area, gets attention, as does the ubiquitous drug dealing in Washington Square Park. Guy Olivieri — in an obviously impromptu re-write — scores a laugh when he hawks his newest product: marriage-equal-a-weed.

Village notables including Edna St. Vincent Millay, Edgar Allan Poe, and Jackson Pollock are called out and the song, “Splatter Me All Over,” about Pollack’s creative process, is particularly engaging. That said, The Greenwich Village Follies goes beyond concern for the rich and famous and pays tribute to both nameless residents and the ubiquitous sex shops that give the streets some of their, er, character.

“The Follies were born out of our genuine interest, love, and desire to celebrate the Village, its characters, its history, and its collective voice that influenced at times the entire country,” co-creator Andrew Frank writes in the program notes. Frank’s writing partner, Doug Silver, agrees. “At its heart, the piece is about art and artists. Greenwich Village has always been a place where people can be who they want to be, and say what they want to say.”

Indeed. The desire to preserve the neighborhood’s vitality undergirds The Greenwich Village Follies and spectators can’t help but walk away from the production singing the praises of this iconic — if rapidly gentrifying — New York City locale.

(The Greenwich Village Follies is performed at Manhattan Theatre Source, 177 MacDougal Street, every Sunday evening at 7PM*. Tickets are $35 and can be ordered by going to thegreenwichvillagefollies.com or by calling 866.811.4111.)

*EDIT: IN OCTOBER, THE GREENWICH VILLAGE FOLLIES PERFORMS AT THE DUPLEX, 61 CHRISTOPHER STREET, EVERY SUNDAY EVENING AT 6:30PM. TICKETS ARE $15 PLUS A 2 DRINK MINIMUM.