Sundays are "pay what you can."

Selections from:
AliceGraceAnon by Kara Lee Corthron, directed by Kara-Lynn Vaeni
Evening All Afternoon by Anna Ziegler, directed by Beatrice Terry
This Is Not Antigone by Kathryn Walat, directed by Portia Krieger
Goldor $ Mythyka: A Hero is Born by Lynn Rosen; directed by Shoshana Gold 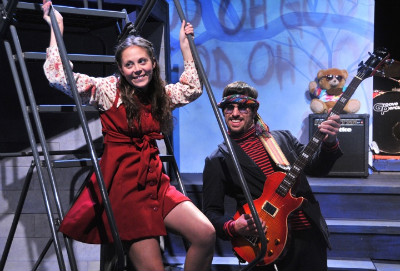 BOTTOM LINE: The Germ Project is an unmissable collection of scenes taken from four full-length commissioned plays “of scope and adventure.”

In an effort to support more “epic” plays in the downtown new works scene, New Georges created The Germ Project to commission four “unproduce-able” plays and then fully produce the most dramatic excerpt from each. These four plays were developed through workshops during the preceding season where big ideas were pushed bigger which all culminates in this presentation of the most theatrically exciting moment from each script: The Germ Project.

Obviously flying in the face of limitation sounds risky, but it pays off in this evening of exciting, dynamic performances. Each play pushes boundaries with its language, content, structure, and storytelling, not to mention the phenomenal use of media throughout. For the first time in a while, I was thrilled by what was happening on stage, and I’m holding my breath that we’ll see more of these plays.

The night begins with Kara Lee Corthron’s AliceGraceAnon where the stories of Alice of the famed Wonderland, singer/songwriter Grace Slick, and a teen runaway drug addict based on Alice Doesn’t Live Here Anymore all unfold, parallel, overlap, and eventually collapse into each other. It’s a rich weaving of characters, themes, and staging by director Kara-Lynn Vaeni that’s stunning to watch. Carolyn Baeumler’s portrayal of a desperate and charismatic Grace Slick is entrancing. I wanted it to go on all night.

Following is Anna Ziegler’s Evening All Afternoon directed by Beatrice Terry where we meet a yearning Latina teen and her housekeeper mother who has never gotten over a lost love. Evening All Afternoon is as poetic and magical as the description given of its setting: “Naples, Florida, and the Dominican Republic, and the space memory occupies when those we love have left.” Terry stages the overlapping of scenes and memories beautifully. The cast is a tour de force. Maggie Bofill gives a winning rendition of the lovesick, hardworking Domanique, while Charise Castro Smith enlivens the space as her rapacious daughter Luiza. This is contrasted by Peter Levine’s quietly elegant Mr. Esterman, the poetry enthusiast. Jorge Chacon brings to life both Ramon, the Latin lover of a nostalgic past, and Fernando, the hoodlum with a heart of gold in the present. And Juan Javier Cardenas gives an endearing quality to the otherwise unappreciated father-figure Mickey.

Then we leave Florida and go to the backwoods of the rural South with This Is Not Antigone. In Kathryn Walat’s version of the myth, directed by Portia Krieger, it's hunting season, and "Anne" finally crosses her uncle when she molests the carcass of the buck he has killed. In a world interspersed with the music of Patsy Cline, the members of this rag-tag family of rustics struggle with one another and with realizing themselves. Anna Kull devours the role of Anne, electric with manic energy and an unabating confidence, while Danny Wolohan plays her seething uncle Karl with a slow burn.

The night is rounded out by the Lynn Rosen play Goldor $ Mythyka: A Hero is Born, directed by Shoshana Gold, where Dungeons and Dragons leads to real life adventures. It’s a fascinating look into fantasy vs. reality, and into what in fact makes something real to the person experiencing it. Goldor $ Mythyka is a high-energy, hilarious madcap hosted by an indefatigable Matthew-Lee Erlbach as the sound-effect-producing, narrating DJ. And I covet the hero costumes that Jenny Seastone Stern and Garrett Neergaard wear.

All in all The Germ Project is breathtaking. Pushing artists to create on the grander scale has led New Georges to produce work that not only stimulates the audience, but obviously gives vigorous creative energy to everyone involved: the committed, courageous actors and the designers who make miracles happen. From Nick Francone’s set with its moving parts and intricate levels to the vibrant, complex lighting of Jeanette Oi-Suk Yew to the outstanding costumes by Jessica Wegener Shay, this is a production on the grandest scale, even if we don't see any of the plays in full. The Germ Project is the most spirited and exciting thing to hit the stages of New York City for some time, and it gives new hope to the possibilities of downtown theatre.

Everyone should see The Germ Project.

(The Germ Project runs through July 9, 2011 at 3LD Art & Technology Center, 80 Greenwich Street (at Rector Street). Performances are Thursdays through Mondays at 8 PM with an additional performance on Tuesday, July 5 at 8 PM. No performance on Monday, July 4. Tickets are $25.00 and can be purchased at www.smarttix.com or by calling 212-868-4444. Sundays are “pay what you can.” For more information visit thegermproject.wordpress.com.)