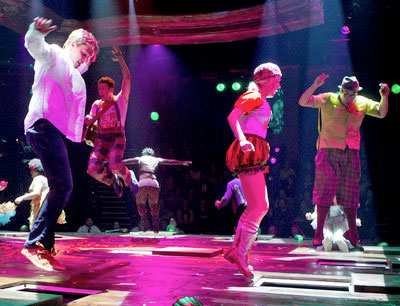 BOTTOM LINE: In many ways, I agree with the negative remarks other critics have said about this production. I still loved it.

A bit of background on me and my history with Godspell: I had purchased, in 2000, a CD recording of the York Theatre Production with Barret Foa, Chad Kimball, Shoshana Bean, Leslie Kritzer, and Capathia Jenkins. The recording, to my late teen ears, was incredible. I loved the score. But I had never in my life seen the show until this production.

The lukewarm critical response thusfar is correct: this Godspell revival is a hodgepodge, hyper-active production, lacking in any grit or real truth. Or at least by the time we got to the crucifixition, I was so numbed by the Lisa Frank Unicorn Magic that I got annoyed at the seriousness. It was interrupting my candy and feathers show high. I wanted more. I wanted more dance and joy and love and Hunter Parrish and trampolines and sparkly glitter. MOAR GLITTER, SHOW!

To be critical -- although I am loathe to do so when I had so much fun -- there are some interesting structural problems. There's no meat, no A plot, no B plot; there is only Jesus and his disciples, engaged in what can loosely be called long form improv/acting class, telling and reenacting the old biblical parables (Prodigal Son, etc). I was very much disappointed in the ending (SPOILER ALERT: Jesus totally dies! I know!) if only because after a whole show of super hyper crazy, there was no closing number! No big giant dance/vocal movement. This serious bit, this Last Supper/Crucifixion movement threw me for a loop, as I wasn't even aware this was an actual reenactment of Jesus's story. I just thought we were watching Jesus and his disciples sharing and storytelling and learning lessons, etc. All of a sudden, sh*t got real, guys. I wasn't prepared and I didn't want it. I wanted the glitter back, and I wanted a big closing number. The result of me being smacked over the head with the Crucifixion was that I got mad at the show and sulked a bit.

As long as we're on the critical stuff, I'd be remiss if I didn't mention the beginning sequence, which begins with this bizarre vocal cascade of the disciples in costume as famous philosophers. They use cell phones and have their names printed on the things they carry. I don't....it was very confusing, folks. Vocally, it's gorgeous and musically complex, and the staging is heartbreakingly beautiful, but the narrative import is lost on me.

To recap on the structural problems: Silly show of silliness, encapsulated at both ends with serious sequences that feel (to me) as if they belong in a different show.

There is so much about this show that is amazing. The Joy is Palpable. I cannot remember a better time I've had at a musical -- the closest that comes to mind in terms of laughter and good times in recent memory is The Book of Mormon. The circus/mime/acting class/minstrel/clowning varieties of storytelling in the show are all organic and entirely ensemble driven, which I love. It's like the show blooms from the ground, like flowers. You can sense that the rehearsal process was a glorious exercise in fun as the group (under the direction of Daniel Goldstein with choreography by Christopher Gattelli) grew these sequences together in the rehearsal hall. I felt like a part of me was onstage with them, goofing around and dancing. Maybe I'm easy. So be it.

The design, in this particular incarnation of the show, is completely brilliant. It's like genius exploding all over the stage. I am a sucker for inventive show design, and Godspell has it in spades. First, its in the perfect space. Circle in the Square is gritty and mechanical, but intimate enough to be warm and cozy as well. The brickface and bare-bones scaffoldy-ness give the show just the right backdrop of rock concert/pizza party in the rec room.

The lights, costumes, sound, etc, are all exceptionally done, but the set, OY. The set is amazing. They sunk a whole lot of the money into the floor/giant trapoline in simple, surprising ways, and it is the greatest trap ever in the history of the world -- I can't go into details, because that's an actual spoiler alert. The music is great, at least to my uneducated ears; I really love all the new arrangements and orchestrations they added to this production and I'm crossing my fingers that there is an iTunes release (please, producers? I know it's expensive, but please?) Acting is wonderful, Telly Leung getting special notice for his incredibly iconic performance, but all the actors are vocally blessed and each character gets several moments to shine. Vocally, Hunter Parrish as Jesus is perhaps the weak link, as he didn't demonstrate the breath support for the belty passages, but he's ridiculously pretty (seriously, the boy looks like he grew out of a cornstalk...he's the living incarnation of apple pie), and he spends quite a bit of time driving the action, so I forgive him his lapses in vocal control. I also doff my cap to the entire team for the onstage magic during "We Beseech Thee," which is my favorite song in the show.
I can understand why people disapprove of this production. The analytical, critical half of me certainly logged and kept careful track of everything that the critics have mentioned, and I grudgingly admit that there is validity to these criticisms. But the half of me that is filled with sparkles and glitter and thrift store clothing and Gummi Bears and Twizzlers simply doesn't care. The magic of the show is the journey, not the destination, and I can rarely recall having a better time at the theatre. None of the rest of the critical stuff, including my five-year old wish for a closing number, really matters. It's a show about joy, and that's why it works. You can never go wrong with Joy.

Thanks for the Sparkly Awesome, Jesus!
Love,
Tzip