Tickets are available at www.planetconnections.org

By August Strindberg; Directed by Oscar Mendoza
Produced by the Mush-Room Theatre Design

Off Off Broadway, Play Revival
Runs through 6.25.11
The Robert Moss Theater, 440 Lafayette Street 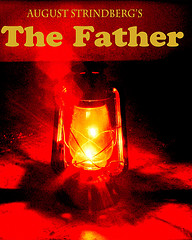 BOTTOM LINE: An opportunity to see one of Strindberg’s less frequently produced plays.

The Father, by August Strindberg, now being revived by The Mush-Room Theatre Design as part of the 2011 Planet Connections Theatre Festivity, is a symbolic, heavy-handed portrayal of the “war between the sexes” as envisioned by Strindberg at his misogynistic worst: in Strindberg’s view, men are heroic, bedeviled and enslaved by their wives and mothers, while women are deceitful, greedy and self-centered. Swindberg wrote this in Sweden in 1887, when fathers were legally in full control of their children’s secular and religious educations and mothers had no say in such matters -- and when Strindberg’s own marriage was deteriorating.

The play begins with the Captain (Ridley Parson) informing his wife, Laura (Sarah Doudna), of his intent to raise their daughter, Bertha (Danielle Patsakos), as an atheist and to educate her to be a teacher. Laura would prefer that her daughter become an artist while the other women in the household would like to see her raised in one or another Christian denomination. (The Captain’s motives, of course, are portrayed as intelligent, rational and honorable while Laura’s are depicted as selfish, unscrupulous, and parasitic.)

Since Swedish law precludes her interfering directly with the Captain’s plans, Laura attempts to achieve her goal through deceit: she implants the idea in the Captain’s mind that he might not be Bertha’s biological father, in the hope that that might dissuade him from caring about Bertha’s future at all. But there is a downside to that: if it is accepted that the Captain is not Bertha’s father, who will pay for her education and what will become of Laura herself?  So Laura embarks on an even more deceitful course: she frames the Captain to appear mentally unbalanced (in which case she might gain custody of her daughter while the Captain still would remain financially responsible for both of them). Having already insinuated to him that Bertha might not be his biological daughter and that she, herself, might have been unfaithful to him, Laura began the process of undermining his sanity; now she raises the stakes by intercepting the Captain’s mail and by lying to the family Doctor (Craig Anderson), to her brother, the Pastor (Anthony Castellano), and to the family nurse, Margaret (Barbara Mundy), seeking to convince all of them of the Captain's madness.

The Mush-Room Theatre Design, the cast and director are all to be applauded for their ambitious efforts in staging this work, which is only infrequently produced in the United States. But their best efforts, unfortunately, are not enough. The actors generally are spatially peripatetic but temporally static which means that they seem to wander about the stage a lot, often for no apparent reason, but that their characters and personalities scarcely change, let alone evolve, over time.  In his poem “Andrea del Sarto,” Robert Browning wrote that “a man’s reach should exceed his grasp or what’s a heaven for?” and that may generally be good advice. But given its limited resources, this theatre group may have reached a bit too far this time.