There is also a $37 student rush, available the day of the performance. 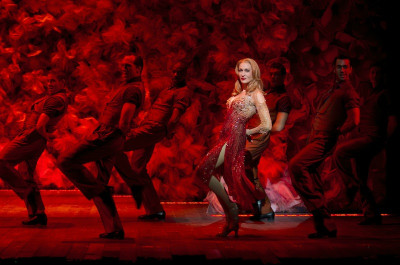 Jan Maxwell, with members of the ensemble. Photo by Joan Marcus.

BOTTOM LINE: Any production of Follies is certain to be a can’t-miss event, and this one is no exception.

If I could go back in time, one of the first things I would do is attend the original production of Follies. This now legendary production (staged by Harold Prince and Michael Bennett, and well-chronicled in Ted Chapin’s book Everything Was Possible) all but guarantees that no revival can possibly compete – or so some would have you believe. Fitting, perhaps, for a show consciously concerned with the effects of nostalgia and romanticizing the past. But since we can’t go back in time (at least not yet), we at least have this often-stunning new production.

As compared to the much-derided 2001 Broadway revival (which I quite enjoyed), this revival is somewhat more traditional and expected: it is less decrepit and more grand. Eric Schaeffer’s staging and Warren Carlyle’s choreography are both well-suited to the material, if hardly revolutionary. And if not as opulent as the original production, this Follies at least acknowledges that there was some grandeur in the past. As the audience walks in to see the entire Marquis theatre covered in gray fabric, and looks at the crumbling proscenium arch, one gets a sense of the beauty that once was. And if this decay is perhaps a bit too picturesque for my taste, this minor flaw is soon forgotten because of the wonderful performances that follow.

Set in 1971, Follies centers around a group of women who were “Follies Girls” thirty to fifty years before; right before the theatre they once performed in will be demolished, they get together for one final reunion. As they gather to “stumble through a song or two and lie about ourselves a little,” the ghosts of their younger selves walk amidst the proceedings, and occasionally come forth as a reminder of how life was (or wasn’t) in the halcyon days of their youth. (It’s worth noting that five legit theatres were demolished to make room for the Marriott Marquis; one wonders if perhaps some of those ghosts might be present as well).

Two of “the girls upstairs” (Sondheim’s original title for this show) are Sally and Phyllis, who used to be close friends and roommates, but whose lives have since taken them in extremely divergent directions. Bernadette Peters gives another wonderful performance as Sally; while I wasn’t completely taken with her rendition of “Losing My Mind,” Peters truly shines in the book scenes. Indeed, her final exit is haunting in its subtlety. As Sally’s husband Buddy, Danny Burstein is also quite good, deftly capturing Buddy’s frustration with not loving “the right girl” – he loves his wife rather than his adoring mistress. But Sally is still in love with Ben, played by Ron Raines; Raines has an enormously powerful voice, one that could easily make Ben seem too manly and assured. Yet Raines is also able to communicate Ben’s increasing insecurity about his choices in life. But without a doubt, my favorite of the four leads is Jan Maxwell as Ben’s wife Phyllis. Maxwell’s “Could I Leave You?” is stunning in its (barely) controlled anger, and then her “The Story of Lucy and Jessie” (which has never been one of my favorite songs in this show) is probably the highlight of the final “Loveland” sequence (in which each of the four does a solo turn). Frankly, just watching Maxwell scratch her shoulder is worth the price of admission.

One of the most thrilling moments of this production is the transition into the “Loveland” sequence, a transition in which the four adults confront their younger selves: Young Sally (Lora Lee Gayer), Young Buddy (Christian Delcroix), Young Phyllis (Kirsten Scott), and Young Ben (Nick Verina). These are tough roles, and far deeper than your typical “ingénue” part. One has to walk a balance between creating an original character yet also playing someone similar enough to the “stars” who play the four leads. All four actors do an excellent job at this, and expertly foreshadow their characters’ lifelong regrets while also embracing the relentless optimism of these four fresh-faced kids.

One of the great things about Follies is that, aside from the four lead characters, there are plenty of juicy supporting characters who sing some of Sondheim’s most well-known songs. Fans of Jayne Houdyshell should rejoice: she is tremendous as Hattie, and her “Broadway Baby” is one of the show’s highlights. Terri White is terrific as Stella, the lead singer in “Who’s That Woman” (the famous mirror number, in which the present day women show they still remember an old tap routine, and are then mirrored by the ghosts of their former selves.) Sure, one could say “Who’s That Woman” is always a guaranteed showstopper, and perhaps that is true, but White and company still bring down the house. And then there is Carlotta, played by Elaine Paige, the "First Lady of the British Musical Theatre" who is perhaps less familiar to American audiences. I’m not completely convinced that Paige’s interpretation of the landmark song “I’m Still Here” is the best choice for this number, but she certainly can sing, building the song from an almost casual conversation to a roaring climax.

If I have one complaint about this production, it is about the intermission. There was no intermission in the 1971 original, and for a few preview performances that was also the case with this production. Certainly I have never been bothered by the intermissions in other productions of Follies that I have seen, so perhaps it is knowing that I was this close to seeing an intermissionless show that makes the break now seem ill-suited. But I definitely felt that the energy and drive of Follies suffered as we all left the theatre to use the restroom and grab a drink. Where were we? What was happening? These are questions the characters might be asking, but not ones the audience should have. Nevertheless, this Follies is an excellent staging of a musical theatre treasure, and certain to be one of the highlights of this season.