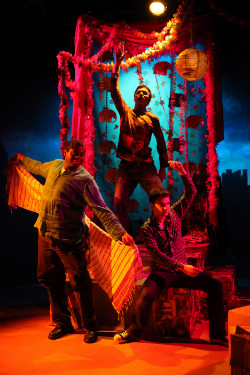 BOTTOM LINE: A wise, witty and exuberant new play about learning to love.

Oscar Wilde said it best: “To love one's self is the beginning of a life-long romance.” Long before Oprah, Madonna or Louise Hay, history’s most famous gay man was preaching self-love. It’s ironic and yet oddly appropriate. While gays don’t have a monopoly on suffering, I can personally attest that internalized homophobia continues to take its toll. And as the current Broadway revival of Larry Kramer’s 1985 play The Normal Heart  reminds us, we mustn’t underestimate the damage done by AIDS to the gay community and consciousness.

But as Bob Stewart’s hilarious and touching new play Fabulous Darshan illustrates, gay men are remarkably resilient. Perhaps because of these individual and collective challenges, we are strong, we are invincible, we are…well…fabulous.

Stewart’s theatre piece à clef centers on Ken Satchel (Tim Cain), a gay man of color, a certain age, and positive HIV status. Ken has carved out a successful career for himself in show business, and is securely ensconced in the longest running show on Broadway ("Now and forever," anyone?). Ken’s main resources are a keen sense of humor and a deeply personal spirituality. Like many exiles from traditional religion, Ken has developed his own rituals and beliefs, which include meditation and lively philosophical discussions with the Hindu god Ganesh (Mike Smith Rivera), a sort of wise and wise-cracking, don’t-worry-be-happy life coach.

Not that Ken’s life is without its dilemmas. His cluttered apartment is comfortable but a bit lonely. And his agent is pushing him to abandon his cozy nest for Los Angeles so that he can pursue a potentially lucrative voiceover career. (“You’re cheaper than James Earl Jones.”) Into this tenuous serenity careens Stu (Evan Bernardin), a 22-year old trust fund baby and would-be actor for whom Ken has both a soft spot and a hard spot (if you know what I mean). Stu is neurotic, impulsive, anxious…and infuriatingly attractive as the young often are. Will Ken’s conflicting desires upset his carefully maintained equilibrium?

Ken makes it his project to show the tortured Stu just what a blessing -- and a blast -- it is to be gay. Like a tribal storyteller, Ken initiates Stu into the joys of camp in the form of over-the-top movie classics Valley of the Dolls, Mommy Dearest, and his personal sine qua non of trashy brilliance, Showgirls . Amidst an endless stream of witty lines and laughs of profound recognition, the two men establish a bond of friendship and mutual regard that is moving to behold. Ken teaches Stu that self-respect is a right but must also be earned, while learning that inner peace is only valuable when it leads to empathy and risk-taking.

Darshan can be translated as honor, dignity, or self-realization. For me it’s about the joy that comes from cultivating self-love and sharing it with family, friends, and ultimately the world. And lest you think that the production is only for gay men, I leave you with the words of my companion at the show, a straight woman: “It made me feel terrific.” Darshan is universal. May yours be fabulous too!

(Fabulous Darshand plays at the Workshop Theater Company, 312 West 36th Street, 4th Floor, through June 25, 2011. Performances are Thursdays through Saturdays at 8PM and Sunday, June 19th at 3PM. Tickets are $18 or $15 for students and seniors. For tickets and more information visit workshoptheater.org.)