Tickets were $18 and were available at

By Jennie Berman Eng; Directed by Adam Knight
Produced by Sans A Productions 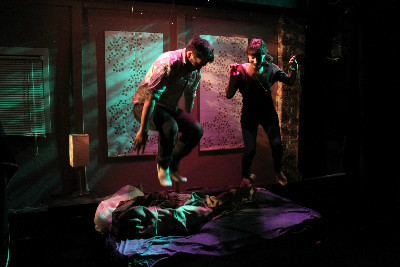 BOTTOM LINE: The simple but well written story raises larger issues about life direction and the bonds of friendship. This production's excellent performances and intricate set do it justice.

The vastly different ways people deal with grief is the central conflict behind much of the comedy and drama within Sans A Productions’s production of Exit Carolyn. The play centers on two best friends who lose their mutual friend and roommate Carolyn. Both of them cope with the loss in two vastly different ways. While Lorna (Anna O’Donoghue) has decided to cope by being over productive (while preparing to leave for work she does leg lifts while sipping her coffee and eats her cereal on the toilet). Julie (Laura Ramadei) becomes a permanent fixture on the apartment’s futon, gorging herself on grief basket pastries and watching episodes of Judge Judy all while numbing herself with repeated hits on her bong. In one of the many mornings depicted in the play, their different modes of coping are best shown by Lorna breathing in the aroma of her coffee with an audible sigh while Julie does the same with her freshly lit bong. Lorna has her sights set on pushing forward and being pragmatic, lining up new roommates to replace Carolyn. Julie however does not want things to move forward, and wants Carolyn’s room left as an undisturbed shrine to their lost friend. Aside from the nagging Lorna, Julie’s only connection with the outside world consists of her interactions with Carolyn’s brother Matthew (Jake Loewenthal), the two aid each other in coping, feasting on ice cream and sharing tokes all while trying to aid one another in filling in the hole left by the loss of their dear friend and sister. As the two become closer they become increasingly aware of a romantic spark they had ignored while Carolyn was still alive. Further comedic relief is provided when Lorna brings home the oddball Avery (Lauren Blumenfeld) as a possible roommate to replace Carolyn.  Clueless Avery brings much comedy to the script through her often inappropriate (and sometimes unintentionally racist) observations. Despite Julie’s protestations, Avery moves in and begins to run her lightning bug supply business out of the home, eventually leading to conflict that propells Julie into a new stage of life.

Despite its simplistic story line, Exit Carolyn remains a hilarious and riveting work, whose success can be credited by the convincing (and sometimes touching) performances from all the cast members. Laura Ramadei, in particular, shows a great amount of skill as a performer and is able to fluctuate convincingly between sardonic wit as well as poignant expressions of her grief and misdirection. The fact that more of the play focuses on comedy rather than drama makes its moments of drama and conflict realistic and authentic rather than unnecessarily melodramatic. Anna O’Donoghue fully embodies her character’s uptightness, set on curing her grief with overproductivity. Lauren Blumfeld also milks every laugh possible from her character’s eccentricities due to her expert comedic timing.

Part of the play’s appeal comes from its overall feeling of authenticity; the set is intricately detailed, convincingly looking like a twenty-something's New York apartment down to the dirty dishes in the sink, paper towel rack, and a fridge and cabinet stocked with food. Overall the simple story of Exit Carolyn serves as a means to explore issues of life direction and the interdependency of friendship. Both the skill of the actors as well as the intricate set make this an evocative and moving production.