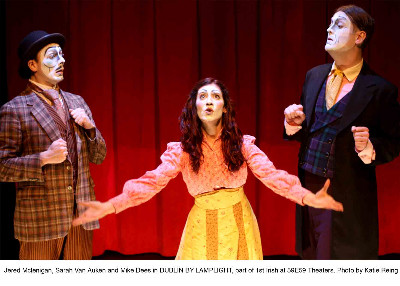 The year is 1904, the place Dublin and, despite the city’s unspeakable filth and squalor, the air is redolent with revolutionary change. Thoughts of women’s suffrage are beginning to emerge. Dreams of Irish independence from Great Britain (or at least home rule) are prompting political (and sometimes terrorist) action. And in the midst of it all, against a backdrop of poverty and fury, whores, beggars, drunkards and rebels, a small troupe of actors led by Willy Hayes (superbly played in the best Chaplinesque manner by Jered McLenigan) have their own high hopes of launching the “Irish National Theatre of Ireland.”

That is the backdrop for this most extraordinary of plays, Dublin by Lamplight, having its New York premiere at 59E59 Theaters as part of the First Irish 2011 Festival of plays. This production is a theatrical delight, highly stylized and combining elements from silent movies, burlesque, slapstick, Commedia dell’Arte, and Story Theatre. Each of the six actors has a major role to play, but each also plays anywhere from another three to seven minor roles -- and they all perform absolutely wonderfully across the board.

The play itself is a mix of fact and fiction and the story takes place on an imaginary day in 1904 when Willy Hayes and his ambitious “Irish National Theatre of Ireland” troupe launch their first production, The Wooing of Emer. It is also the same day that the King of England is arriving in town, creating a perfect opportunity for political and social protests of all sorts.

The star of The Wooing of Emer, the play-within-a-play, is Eva St. John (Megan Bellwoar) who is to play the role of Emer. But Eva is also a suffragette leader who, chaining herself to a fence as part of her protest and getting herself arrested for her efforts, can’t make it to the theatre in time for the play’s opening. And so, in time honored fashion, Maggie (Sarah Van Auken), who is only in charge of costumes at the theatre but aspires to be an actress herself, is enlisted to replace Eva at the last moment -- and does so to great acclaim.

Willy’s brother Frank (Jared Michael Delaney) is to play the part of Cuchulain, a legendary Irish hero, opposite Eva’s Emer, but he, too, has a real life agenda that conflicts with his theatrical role. In his case, it is that he is a terrorist bomb-planting rebel which delays his arrival at the theatre as well and which prompts his brother, Willy, to declaim in sadness and despair: “When I said we were to act for Ireland, I meant act for Ireland, not this. Not kill people."

The plot turns out to be even more complicated than that. Maggie is carrying Frank’s child but Jimmy Finnegan (Michael Doherty), the most innocent member of the troupe, is in love with Maggie.  Rounding out the cast is Mike Dees in the role of Martyn Wallace, an over-the-top transvestite member of the wannabe “Irish National Theatre of Ireland.”

This is a production that can be enjoyed and appreciated on many levels – as a delightful phantasmagorical romp, as a metaphorical commentary on life imitating art, or on the very survival of the human spirit in the face of adversity.  Indeed, the day I saw the play marked the tenth anniversary of 9/11 and one might even draw parallels between the play’s message and the indomitable spirit Americans have exhibited since that tragic day a decade ago. In light of Eva’s arrest and the chaos surrounding the King’s arrival, Martyn proclaims that “We can’t do the play….Eva’s in gaol. And the topless towers of Ilium caught fire.”

And Willy and Martyn then continue as follows:

Martyn: The walls of Troy were breached and tumbled down.

Willy: The battlements that had shored up a wondrous city collapsed.

Martyn: And the clouds, the black clouds of despair…

But it is at that point that Maggie intervenes to complete Martyn’s sentence in a manner he had not intended:

Maggie: …parted and a golden ray of hope shone down, a ladder to the stars…

And the scene ends with Maggie stepping into the breach and assuming the role intended for Eva, proving yet again that the show and, indeed, life itself, must go on, even in the face of the worst adversity.