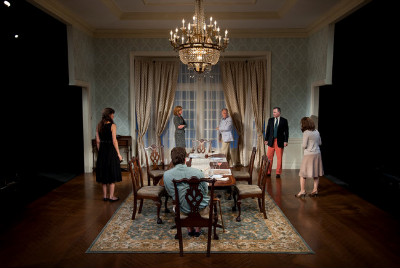 The cast of DREAMS OF FLYING DREAMS OF FALLING. Photo by Joshua Bright for The New York Times.

You can’t choose your family, nor can you necessarily choose your family friends. But distaste for either doesn’t stop them from being a formulative and often highly disruptive part of your life. Exploring these themes within a boisterous evening meeting of two families is Adam Rapp’s (The Metal Children, Ghosts in the Cottonwoods) latest play, Dreams Of Flying Dreams Of Falling, an Atlantic Theater Company production, now showing at Classic Stage Company.

In celebration of the Von Stofenberg’s son James returning from rehab, the Cabots host the Von Stofenbergs for an elegant family dinner. Bound up in each other’s lives for many, many years, these two three-person families act with the most familiarity their social status will allow. But, as the evening progresses, those strictures begin to crumble, leaving the chaotic disarray of attempted fantasy fulfillment strewn over the dining room table.

The ball-busting, bosom-bursting Cabot matriarch, Sandra (affectedly pronounced "Saundra"), desperately longs for a real man like Dirk Von Stofenberg in her life, and she makes sure Dirk knows it. Weirdo adult children Cora and James, naturally have an interest in one another, though their matching set of emotional baggage would seem to keep them from being able to share much of anything greater than physical gratification. And observing it all is maid Wilma, the African American Brooklynite that Sandra’s so generously taken in, not merely to keep her employed, no, but to teach her French and Shakespeare too, of course.

Each packed with a laundry list of issues, the characters in Rapp’s play wear their psychological disorders on their expensive sleeves, rather than internalizing them. Though this may be par for the satirical absurdity of the Dreams Of Flying course, it renders the characters flat and the ruse begins to wears a bit thin as the evening chugs along. The characters simply become a set of zingers or quirky sentiments. They lack a fully-fledged humanity, quite unlike many of the characters in Rapp’s previous works who hold their cards closer to their chests.

By the end, it feels as though Dreams Of Flying has come about as a cause for the messed up trust fund kid. A case study that should be titled something along the lines of, “In Defense of the Hipster: With Parents Like These, Who Can Help But Be Desperate For Attention And Clambering For Weirder Ways To Draw It.” But this sentiment just makes the children less likable, as we all have familial-spawned neuroses, after all, and few of us a trust fund to help quell them.

All that being said, Neil Pepe has certainly enabled the over-the-top characters to come to life as much as possible and the actors all represent their respective caricatures dutifully. Particularly of note, Christine Lahti, blessed with the most comically ridiculous lines, imbues the character of Sandra Cabot with as much juicy absurdity as she can bear without popping. Worth mentioning, too, is Andrew Boyce and Takeshi Kata’s set, which holds the cold, Connecticut drama in perfectly. Naturalistic and ornate, it is expansive enough to give the pregnant, awkward pauses ample room to breathe, but not so much as to enable them to float away.

Overall, despite a good dose of witty dialogue and amusing characterizations, the play simply doesn’t stack up against Rapp’s previous work, or offer enough to deliver a wholly satisfying evening. Dislikably transparent and one-sided, Rapp has perhaps satirized to the point of leaving too little meat on these Prada-bones to sustain an hour’s worth of their stewing.

(Dreams Of Flying Dreams Of Falling plays at Classic Stage Company, 136 East 13th Street between near 3rd Avenue, through October 30, 2011. Performances are Tuesdays at 8PM, Wednesdays at 8PM, Thursdays at 8PM, Fridays at 8PM, Saturdays at 2PM and 8PM and Sundays at 3PM and 7PM. Added Wednesday matinees on October 19th and October 26th at 2pm. Tickets are $65 and are available at ticketcentral.com or by calling 212.279.4200.)