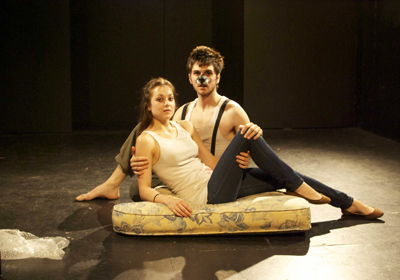 BOTTOM LINE: Dirty Little Machine is, overall, an enthralling, often laugh-inducing work that explores both the relation and the divide between sexual fantasies and reality.

Regardless of one's final opinion of Horse Trade Theater's production of Dirty Little Machine, it is undeniably compelling and attention grabbing, tackling such taboo and complex issues as: gender roles, pornography, voyeurism, the difference between sexual fantasies and reality, and sexual fulfillment.

In a matter of moments Jane locates a "weasel" appropriately named Dick (Ben Mann) and after lightly flirting with him he proposes that they make out. They do, which leads to Dick asking her for her phone number so that they can go on an actual date. The date turns out to be Dick explaining that he has no money to take her to the movies unless she wants to pay, and suggesting that they again "make out," which leads to Dick inviting himself over to her place for sexual intercourse. Fully embodying his "weasel" identity, he wears a plastic animal snout and makes animal noises during sex. Jane admits that he is both a good kisser and good in bed, which perhaps partly explains her illogical decision to allow a man she seems to despise to move in with her into her cramped attic apartment.

Each scene of the play is interspersed with a segment of Jane’s previously mentioned prized book that bears a parallel to the story. As Jane becomes further and further enmeshed into life with Dick, the embodiment of her fantasy, the princess in her novel becomes more and more involved with her uncle.

Surprisingly, Jane never cuts herself free from the weight of Dick. During a scene where it seems the two are destined for marriage, Jane narrates a scene from the novel in which the princess wonders why she would stay with someone who treats her so badly, realizing that by following her fantasies she has lead herself down a path to her own destruction.

Dirty Little Machine’s willingness to tackle taboo subject matters makes it immensely compelling; never once does the play lull. The source of much of the play’s laughter is Dick’s idiotic commentary, of which actor Ben Mann milks every possible laugh with his comedic skill. The talent of both performers, as well as director Nathan Schwartz, fully brings the play to life despite a small stage and a bare bones set, making ample use of their limited space. A clever use of sound effects also fill in for the minimal use of props. The immense talent of this trio is perhaps best shown during such difficult to re-create scenes as a threesome with an invisible party. Miranda Huba's script is both hilarious and fantastical as well as timely and relevant in our voyeuristic, porn-saturated era. Dirty Little Machine is a highly original, thought-provoking work that explores sexuality and how we connect with each other within a voyeuristic culture.