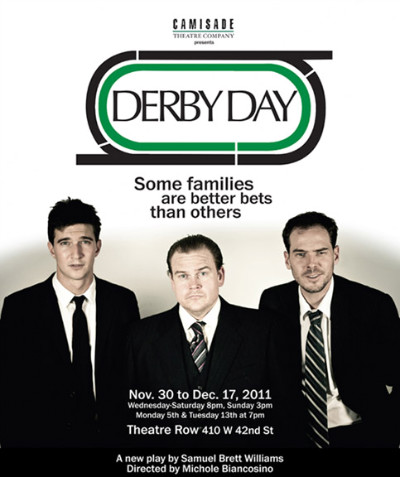 There’s a point in your theater-going career when you’ve think you’ve seen every combination for dysfunctional families. You can live life with this assumption until you see Derby Day, who take the cake, every cake forever, in the bakery of dysfunction. Derby Day doesn’t just push the envelope, it rips the envelope in half, lights it on fire, and has sex with it. Audience members literally gasp as they watch the three brothers of Derby Day reveal shockingly terrible truths to about their abusive family history and beat the crap out of each other onstage in very realistic fight scenes at least a half dozen times. The levels of betrayal, deceit and total nastiness makes August: Osage County look tame. While playwright Samuel Brett Williams' new dark comedy maybe spends so much time demonizing the characters that you doesn’t feel inspired to root for them, it’s still an amazing piece of theater.

Derby Day is set at the Oaklawn Derby in Hot Springs Arkansas in a tacky and sparsely furnished luxury box. Throughout the day the three brothers place bets on the derby just hours after thier father’s funeral. The brothers come from a background of terrible brutality from their abusive father and absent mother, and have never shaken the circle of violence. In between the races, they spend their day being outrageously cruel to one another, revealing affairs with each others wives, reliving sadistic bullying traditions, and physically brawling with one another trashing the room and whatever is left of their relationship.

Oldest brother Frank (Jared Culverhouse) has paid for their late father's funeral and is troubled over his estranged relationship with his handicapped son and fourth ex-wife. Culverhouse is the perfect actor for this role, with a stout stature and a face that burns red when Frank’s explosive temper gets the best of him. He most harshly lashes out at youngest brother Johnny (Jake Silbermann). Johnny comes off as the most bright-eyed of the three, which is saying something since he’s hopelessly trying to win back the wife and daughter who cut him since his drug, alcohol, and gambling problems landed him a stint in jail. The last brother to enter is Frank (Malcolm Madera). Madera’s fast-paced blunt delivery smartly portrays the brother with the largest chip on his shoulder who seemingly gets off on two-timing his brothers. The three of them rehash family drama and quite literally drink themselves stupid and slug it out onstage for 75 minutes, only stopping to either flirt or degrade their waitress Becky, played by Beth Wittig.  While Becky’s been around the block and is little harsh around the edges, she’s the only character onstage worth rooting for and capable of redemption.

What’s really exciting about Williams' characters is that he constantly raises the stakes, making their relationships that much more twisted, outlandish, and morose in every scene. The brothers ruthlessly joke about each other’s most sensitive flaws -- a crippled son, alcohol problems, cheating wives -- with such brutal honesty that could only come from family members, the people you grow up with, the ones who really know you. The affairs, the abuse cycle, and the unrelenting pace of family secrets reveled are simultaneously humorous and horrifying. The fight scenes are shockingly realistic and I'm pretty sure that they were actually chugging mulitple PBRs on stage. Those are either very realistic looking props, or those actors are freaking epic / drunk.

While the extremity of all the action and character twists in Derby Day do not lead the audience to empathize with these brothers, it’s refreshing to see a play that caters to an assumed intelligent audience who doesn’t need every heartstring plucked, and nonetheless appreciates a shocking and awesome piece of theater. The brutality is deplorable, the fights are outrageous, and it's downright suprising how many times Williams successfully raises the stakes in 75 minutes. But days later, you won’t feel bad for any of these guys; you’ll just be glad you’re not related.

(Derby Day plays at The Clurman Theater, 410 West 42nd Street between 9th and 10th Avenues, through December 17, 2011. Performances are Wendesdays through Satudays at 8PM; Sundays at 3PM. There are added performances Monday, December 5th at 7pm, and Tuesday, December 13th at 7pm. Tickets are $18 and are available at telecharge.com or by calling 212.239.6200.)