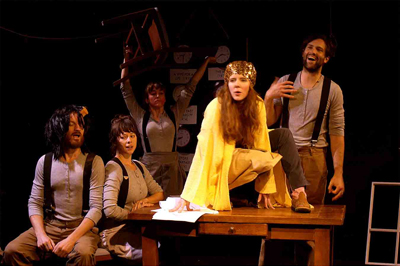 BOTTOM LINE: A playful and hilarious adaptation of a classic playwright's work.

The New York Neo-Futurists are best known for their ongoing late-night show, Too Much Light Makes the Baby Go Blind: 30 Plays in 60 Minutes, in which the ensemble performs very short, numbered plays in an order the audience chooses. The company adheres to the aesthetics of “honesty, speed, and brevity.” Or, as the MC puts it, “we are who we are, we are where we are, and we are doing what we’re doing.”

In their most recent work The Complete & Condensed Stage Directions of Eugene O’Neill, Volume One: Early Plays / Lost Plays, directed by Christopher Loar at The Kraine Theater, the company takes on a now-staple of American playwrights: Eugene O’Neill. The introduction points out though, that to his contemporaries, O’Neil was considered a “downtown” artist. Thus, the Neo-Futurists are simply returning his work to its original and proper sphere: experimentation.

Jacquelyn Landgraf is the narrator, and she reads the playwright's endless stage directions with incredible stamina and expression. For the other performers (Danny Burnam, Brendan Donaldson, Cara Francis, Connor Kalista, Erica Livingston, Lauren Sharpe), the production is an exercise in listening and physical clarity. And their execution couldn’t be better. Many have training in clowning and puppetry, and it shows. In one moment, an alligator hand puppet is so skillfully manipulated that you forget it is not a human infant.

For those concerned that the show endangers O’Neill’s stories, fear not. The playwright wrote some pretty detailed instructions, and the actors take each one step by step. When Kalista is given the direction: “his face becomes harsher and harsher. [he] seems to crumple up. Nothing seems alive about him but his eyes, staring horribly, and his right hand which fingers the gun…,” he follows it as a series rather than a single moment. We can almost hear the internal monologue.

The overall effect, of course, is physical comedy, but that does not mean that there are not moments of poignancy. We may laugh at the tenement mother with tuberculosis because she’s “throwing” herself into a chair. But it doesn’t make the moment when she is ripped from her baby any less devastating.

Imagination is required for this show as the props are often representative rather than literal. A “fire” is formed from a fire safety bucket and a “blush” from excessive red powder hidden inside a book. The multitude of props, too, is staggering. Bravo Christine Cullen for stellar stage management. The moment a stage direction calls for a thing — whether it be a gun, a queer hat, or a deformed nose — the actor has it in his or her hand.

The only flaw in the production is that the joke is made after the first couple of scenes.” Okay,” the audience thinks, “you are performing overly-detailed stage directions in an outlandish and very literal manner. We get it.”  But, at only 70 minutes, the fact that we know the punchline doesn’t make the delivery any less delightful. Go and see The Complete & Condensed Stage Directions of Eugene O’Neill, Volume One: The Early Plays / Lost Plays. You will be glad you did.

(The Complete & Condensed Stage Directions of Eugene O’Neill, Volume One: The Early Plays / Lost Plays performs at the Kraine Theater through October 8, 2011. Performances are Wednesdays through Saturdays at 8pm. Tickets are $18 ($12 for students with ID). To order tickets or for more information, call OvationTix at 1-866-811-4111 or visit www.nynf.org.)