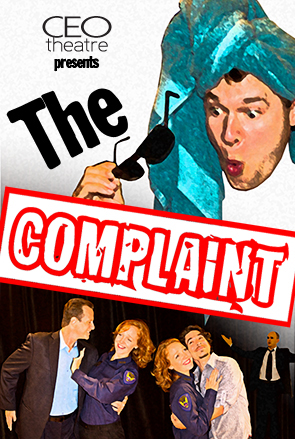 BOTTOM LINE: A play in peril, a marijuana bust gone wrong, mistaken identity, and the ethical battle between what is right and what is legal pervade The Complaint.

Stoners and Oscar Wilde aren't usually linked together. However, it is this very image that kicks off Randy Noojin's new play The Complaint, suggesting that in the world of his play, not everything may be what one initially expects. Gary Ortega (Josh Adler), an actor about to tour in a production of The Importance of Being Earnest, and his director/weed dealer, appropriately named Bud (Michael Poignand), sit in Gary's apartment rehearsing the British dialect and getting high. In the following scene we are brought into the office of Police Officer Archer (played by Noojin himself) as an eager young woman named Gretchen (Amanda Ladd) tries to convince him to oversee the final part of her police training. We learn that the thread connecting these two stories is found in a complaint that Gary has filed against Officer Archer for using excessive force in a marijuana bust the previous year.

The play clips along at a fast pace in the first act, allowing the audience to feel right in step with the characters as the story twists and reveals the ambiguity of the encounter between Archer and Gary, and most interestingly, reveals who the young woman really is. Gretchen, who we at first assume to be an eager and doting young cop, is in fact a double-double agent whose aim is to expose Archer’s corruption in the force, and thus expose the blurred line between what is ethical and what is legal. Ladd portrays Gretchen (...or is she Merrill...or is she Gayle...) with an enviable flexibility and an impressive knack for accents. It is her character that lends a feeling of mystery to the first half of the play that is enjoyably punctuated with moments of humor.

What makes Noojin’s play gripping is his ability to spread a variety of ideas and moral ethics to the shifting perspective of his female protagonist. As Gretchen/Merrill/Gayle slips in and out of her duplicitous roles (all of whom seem to have wildly conflicting opinions), The Complaint urges the audience to see all sides of the arguments surrounding topics including drug use, police brutality, and the truth (or lack thereof), in human relationships.

As the plot begins to unravel, so does the play’s mysterious air. It transforms into a bit of a farce in the second act. Perhaps the intention is to echo Oscar Wilde, but set against the first act it feels more like a discord than a stylistic choice. The final scene of The Complaint, which is surely meant to evoke the final scene of The Importance of Being Earnest, feels like a “gotta wrap things up” scene; and considering the strong elements that precede it and the short length of the play, it feels as though more time can be spent on providing a more harmonious conclusion.

Under the fluid direction of Bryn Boice, The Complaint’s story is told clearly, likely a challenge considering the tight space of the 45th Street Theatre. The cast successfully depicts a variety of characters ranging from theatre gays to police hillbillies, with particularly notable performances given by Ladd and also by Noojin who portrays the racist and brutalizing cop with a humanizing complexity and frustration. Adler, Poignand, and Nicholas Alexiy Moran, as the internal affairs officer Cliff, all turn out solid and committed performances, but it is the questionable nature of Noojin and Ladd’s characters that gives them an extra edge.

The Complaint is an attention-holding night at the theatre that comfortably allows an audience to ponder questions of morality and honesty without becoming too grave. Some elements of the play could stand to be more completely realized, but overall, it is a promising work that left me personally with few...complaints.

(The Complaint plays at the 45th Street Theatre, 354 West 45th Street, through November 13, 2011. Performances are Wednesdays through Saturdays at 8PM and Sundays at 3PM. Tickets are $18 and are available at smarttix.com or call 212.868.4444. For more show info visit ceotheatre.org.