By Crystal Skillman; Directed by Meg Sturiano
Produced by The Management and Horse Trade Theatre 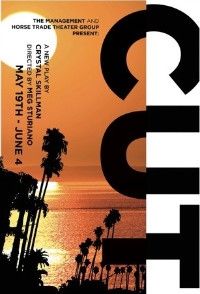 BOTTOM LINE: A funny, idiosyncratic show about the people behind reality television, topped off with some gifted performances.

Reality television and theatre are often a bit of an awkward mix. Plays have attempted to comment on the phenomenon and say something deep, or find apocalyptic darkness in the exploitation, voyeurism, or general brainlessness of the genre, but it more often than not gets delivered with too much pomposity than necessary, and a tinge of sour grapes. The fact is, reality shows are intensely popular, so, it's a no-win situation to go after them because most of your audience will likely be a fan of at least one. Also, they're not all as nefarious or culture-killing as they are sometimes portrayed as. What Cut impressively pulls off is that it is about editors of a reality show, but amazingly is not an “issue” play. It looks slightly into the future of reality shows, yet maintains their overall harmlessness. This ultimately gives the characters and their situation room to create their own sense of realism.

It starts off with the set. A cramped office where the editors work on their computers against the backdrop of a humongous cork-board where they have the names of each of their subjects, “The Ladies of Malibu.” Each name is printed out with a different font, and it becomes clear between that and the hundreds of colorful index cards that these editors aren't schemers or profiteers — they are fans. Refreshingly relatable, these three take pride in their work and generally enjoy what they do, although they're still easily stressed. These characters are in the throes of a crisis befitting of them: the big-wigs have said the season finale needs to be re-cut, today.

The hardest hit is head editor Danno (Joe Varca), who kicks off the play with a monologue as he locks himself in the bathroom, hiding from his two co-workers: the young and hyper Colette (Megan Hill), and ball-busting, iPhone-wielding, Rene (Nicole Beerman). It's a doozy, and establishes the breakneck, confessional tone of the entire play, as the three alternate comedic monologues often, all to similar success. With Skillman's attention to detail, Sturiano's choreography, and the actors' unceasing energy, effort becomes the name of the game and the play's great strength. Throughout the entire 80-or-so minutes, I never once felt anyone in the show, in front of or behind the scenes, weren't doing their absolute, talented best.

There are, of course, still some minor differences between the best of the best and worst of the best. For example, Colette is so perfect with such well-drawn quirkiness (both in writing and acting) that the other two characters become slightly less sympathetic by comparison. Additionally, Danno and Rene are given some last-minute romantic material that isn't necessarily pulled off by actors who do co-worker so well. To the play's credit, however, this could have been an intentionally awkward pairing. I just needed a little more of a hint either way.

What also must be pointed out is that while the play is such a smooth ride — seemless flashbacks, the strong spine of creating a new season finale, and the revelations of each of the secrets the characters have been keeping from each other — some of its symmetry works against it. Each of the characters are seemingly given one “special” flaw/secret that gets revealed throughout the play, and even though it makes for good, dramatic scenes, these flaws are ultimately not truly revealing of the characters' psychologies. I got more out of Rene's monologue about her father's reaction to the news that she works in reality television than the more harped-on drama of her marriage. Same with Colette's tendency to sneak footage home with her, rather than her confusing unwanted pregnancy. These are a little too close to the kind of drama you would actually see on a show like “The Ladies of Malibu.” Danno's little sister that he simply can't seem to call back is the most successful flaw of the three, being that it's the most original and small in scale; it is in the details where Skillman most excels.

Still, Cut is a joy to watch. Its flaws are forgivable given its overall easy-going and creative nature. Sometimes what you choose for your characters, like editors do for reality shows, does not always resonate with an audience. But as with those shows, the fact that Cut's characters have flaws at all makes for compelling, addicting viewing. Cut depicts real, dynamic working people in Los Angeles, who I would indeed watch every single week. Probably even when something better was on.

(Cut plays at UNDER St. Marks, 94 St. Marks Place, between 1st Avenue and Avenue A, through June 4, 2011. Performances are Thursdays through Saturdays at 8PM. Tickets are $18, and $15 for students and seniors. To purchase tickets and for more information visit horseTRADE.info.)