Civilization (All You Can Eat) 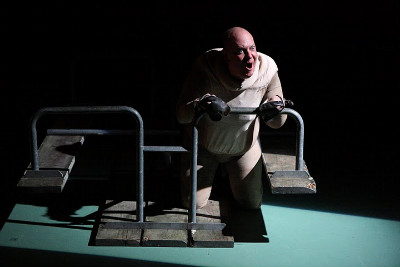 Tony Torn as Big Hog in Civilization (All You Can Eat). Photo by Carl Skutsch.

BOTTOM LINE: An enjoyable piece of political commentary with a snarky script and a talented cast.

Comparing the insatiable hunger associated with America’s rampant consumerism with that of a ravenous beast is not a unique view of the present state of affairs, though it’s certainly a message that bears repeating. Jason Grote’s new play, Civilization (All You Can Eat), is a snarky commentary on Americans' overindulgent, over-consuming tendencies. Set in pre-election 2008, Civilization, now playing at HERE Arts Center, cleverly revisits the various issues endemic to the nation just a few years ago and that indeed linger still.

Grote’s play begins and ends with swine: first the barnyard kind and later the corporate varietal. Big Hog (Tony Torn), a giant, all-observing though only obtusely-understanding penned-pig awaiting his time for slaughter, has decided that he’s ready to make his escape, ready to take leave of his prison and see the world outside.  His mission and journey underscores the other stories in Grote’s play, the human stories, which all, more or less, boil down the same animalistic necessity: eat or be eaten. African American aspiring director, Zoe (Melle Powers), has taken on directing a demeaning Twix commercial to get her start, despite the nagging need to qualify her decision to direct the piece as a way to get in a foot in the door. The situation is not made any easier by the fact that this particular campaign involves two of America’s Founding Fathers about to engage in hand-to-hand combat over the share-worthy confection, with one Father (played by a non-white actor) threatening to “bitch slap” the other. By the end, it seems her opportunity to make art has arrived, though from the hands of big business, at what cost? Zoe's husband, Mike (Jeff Biehl), is no less conflicted. An academic who has taken to inspirational lecturing rather than staying in academia, Mike similarly struggles to find meaning in the path he’s taken, but discovers he has little choice but to press on. Likewise, David (Andres Munar), the actor doing the slapping in Zoe’s commercial, questions his role in Zoe’s commercial, though shamelessly cashes in on his own supposed suicide attempt to make a name for himself. And Mike’s racist, single-mother sister, Carol (Elizabeth Rich) can’t understand how things went so wrong for her as she unsuccessfully fights to keep her house and her unruly, vegan daughter, Jade (Reyna de Courcy).

Tightly synchronized pieces of dance-like choreography punctuate scene changes. These blips of heavily gestural, dark and almost violent movements, all emulating forms of consumption, unify these characters as penned in to the same routine. Whether intentional or no, the various actors range in levels intensity in the synchronized motion, offering further insight into their various degrees of trapped desperation.

Each character begrudgingly operates throughout the play, disdainful of their lives but unable to make a change. Jade manages to escape her present situation, only to find a drearier end. The only comfort to take, as Zoe puts it, is knowing that human life will barely register in the history of the universe and that existence at all is a kind of miracle. And true, there can be comfort in knowing that today's choices are rather inconsequential in the bigger picture, but it's this very notion that so easily allows for lapses in personal ideology.

Grote’s script is smart and fast-paced, each of the short scenes are trim and effective. Despite the fact that much of the discussion-worthy material within the play is not wholly unique (such as contemporary American race relations and arts versus consumerism), Grote’s approach and writing is fresh and buoyant. Seth Bockley’s taut direction and the talented cast of actors all add up to a fine production. While not supplying any easy answers, Grote’s Civilization smartly illuminates a good handful of America’s most glaring issues. And it does so in a strange and interesting enough way that those issues and the questions they dredge up can’t help but linger for a while after.