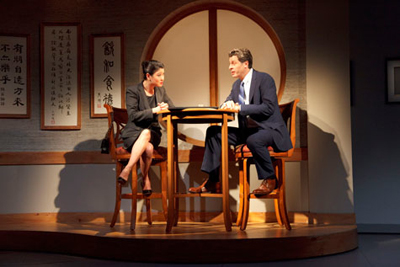 I am not familiar with the Chinese language or Chinese business practices. So I sympathize with Daniel (Gary Wilmes), the eager but wholly befuddled American businessman trying to score his first deal in Asia, in David Henry Hwang's entertaining new play Chinglish. Daniel learns the value of a translator as he immerses himself in a different culture with a different set of rules.

Chinglish is a comedy with most of its humor coming from miscommunication. Daniel speaks only English, and he attempts to present his company's proposal to Minister Cai (Larry Lei Zhange), who speaks only Mandarin Chinese. Although both have translators, the meaning of the conversation is often lost in translation. This runs (not so subtly) parallel to Daniel's objective, for his sign company to create the new signage for the city's cultural center, as previous signs have shown faulty Chinese to English translations. Just as "Chinglish" signs aren't always clear -- the handicapped restroom sign says "deformed man's toilet" -- the dialogue between characters is often muddied -- Daniel's description of a steakhouse as "like my second home" is translated to "where he sometimes lives."

Daniel's translator, British-born Peter (Stephen Pucci), advises Daniel on the best ways to build a relationship with Cai and seal the deal. Cai's second in command, strong-willed and sexy Xi (Jennifer Lim), keeps Daniel extra interested in the negotiations. But dubious behavior on Peter's end and unclear answers from Cai make Daniel suspicious. A foreigner in both language and customs, Daniel tentatively negotiates his situations, relatively powerless against those who can actually communicate with one another. As his relationship with Xi grows, Daniel begins to learn who he can trust and who he cannot.

A lot happens in this story. Peter, Cai and Xi all pursue multiple agendas and their behavior is often manipulative. Even Daniel holds a secret. This makes for a very engaging play, and Hwang's strategic writing lets the audience know just enough at given moments. This also leaves open lots of doors, however, so behaviors aren't always fully explained, such as why everything comes to a head at this given moment. Dramaturgical sticklers might have some outstanding questions, but I doubt audiences will care, on the whole. Chinglish is a compelling story worth investing in; Daniel's palpable frustration makes the play all the more engaging.

Also worth noting is the use of language in Chinglish, which is mostly in Mandarin Chinese. This is, to my knowledge, the first play on Broadway to be in Chinese, and an accomplishment in its own right for the under-represented Asian culture in American theatre. Hwang's slick script and Leigh Silverman's smart direction keep everything completely clear: English supertitles are projected onto the set every time a character is speaking Chinese. Although there's a bit of reading on the audience's part, the story is always comprehensible. Spending two hours with a language I rarely hear was a sensory delight. As the play gives its own insight on a language's meaning and syntax, the audience indulges in their own auditory experience. I imagine Chinese speakers will have a different but equally absorbing adventure.

Chinglish is quick, witty, allluring and sincere. The acting, direction, and even David Korins's double-rotating set work together to project a dynamic energy that both aggressive and attractive. After a sold-out run at Chicago's Goodman Theatre last season, it seems completely appropriate that Chinglish should now be here in New York. No matter your cultural background, Chinglish is a highly entertaining new play as insightful as it is comical.

(Chinglish plays at the Longacre Theatre, 220 West 48th Street, in an open run. Performances are Tuesdays at 7PM; Wednesdays at 2PM and 7PM; Thursdays at 7PM; Fridays at 8PM; Saturdays at 2PM and 8PM; and Sundays at 3PM. Tickets are $32-$122. To purchase tickets visit telecharge.com. For more show info visit chinglishbroadway.com.)