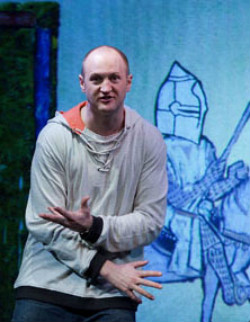 BOTTOM LINE: An audacious hip hop approach to some great literary classics; the show is funny and thoughtful.

It’s always challenging to approach the literary classics in a truly innovative and unconventional way. Focus too much on the entertainment value and you can end up with a Hollywood-esque caricature of the piece (yes, I’m looking at you Romeo+Juliet). Linger off the more traditional interpretations and you can receive the ire of the scholastic crowd, who will rapidly disqualify any work that lacks the due reverence to the original masterpiece. So Baba Brinkman’s hip-hop rendition of The Canterbury Tales is bound to raise a few eyebrows on both these fronts, whether you belong to the band of entertainment junkies (whom he calls “tourists”) or are situated more on the side of the literary “purists.”

Brinkman rhymes his way through about four and a half different tales in this show (he never actually finishes the fifth, exhorting us instead to read it). The Canterbury Tales Remixed actually starts with the ancient story of Gilgamesh, which not only is a few thousand years older than Chaucer’s story but is also situated several thousand miles away from the British Isles. It narrates the adventures of the Sumerian demi-god who desires to chisel his name into the annals of immortality. Not only does Brinkman follow the story quite precisely, he actually provides some intelligent commentary on its theme, discussing what it actually means to be immortal and if it’s even worth all the fuss. Gilgamesh is followed by The Pardoner’s Tale, The Merchant’s Tale and the Wife of Bath, three great stories from the Canterbury Tales themselves, and he ends the night with another Chaucer classic: Beowulf. Add a DJ and a healthy dose of “turntablism” and you have The Canterbury Tales Remixed in a nutshell.

The challenge Brinkman faces is pretty immense: how do you deliver 85 minutes of rap about literary classics while keeping your audience engaged? He actually manages to pull this off pretty well by combining some witty lyrics, a natural talent for storytelling and some darn good beats (courtesy of Mr. Simmonds, his DJ and composer sidekick). While spitting out his verses, he challenges us to think of rap as just another evolved form of the oral storytelling tradition. Once there were troubadours that frequented the main squares of the villages offering stories and poems of adventures, romance and human passions. Now we have other storytellers, he claims, ones that use hip hop as their poetic medium, such as Eminem, Kanye West or Ludicris (try and keep an open mind here). And mirroring the stories told way back when, Brinkman’s lyrics are filled with social commentary as well as present day references and tongue-in-cheek quips. For example, Wall Street’s 1% are mentioned as are the Penn State football coaches and the slowly degenerating quality of Arnold Schwarzenegger’s movies (and biceps). This makes for some pretty entertaining moments and will have you laughing throughout.

Brinkman also makes use of a set of visuals to accompany his recitals, which range from South Park type collages to old movie footage overlaid with objects and relics, which are often hilarious. Gilgamesh is portrayed as Arnold Schwarzenegger in Conan the Barbarian, with Arnie’s face overlaid with a sculpted Sumerian mask. The Merchant’s Tale is represented by the love triangle formed between Scarlett Johansen, Hugh Hefner and Matt Damon, personifying the time old themes of jealously, adultery and the battle between the sexes. For those of you thinking that this sounds like nothing but a complete bastardization of The Canterbury Tales, Brinkman actually does a very good job in conserving the original plots, and has obviously spent considerable time (and his grad school dissertation) converting the tales into rappable lyrics while still maintaining fidelity to the original story. This, however, is no assurance that you’ll like it.

I also particularly enjoyed the small explanations in prose given between the tales, which offer an introduction to the story and mention some of Brinkman’s thoughts on bringing that tale to life. For example before The Wife of Bath he talks about how difficult it was to interpret a 90-year old woman from a 14th century story using rap -- an unusual challenge indeed.

Brinkman’s audacity in interpreting these tales in such a modern format is pleasing and humorous. I enjoyed most of the show, even though I’m not a big fan of rap (although I do love The Canterbury Tales). For an off Broadway production the price is a little on the high side, but if you come back, as I did, having been delightfully entertained and yearning to (re-)read the source material, then you can consider yourself well reimbursed for your hard earned cash.

(The Canterbury Tales Remixed plays in an extended run through February 5, 2012 at the Soho Playhouse, 15 Vandham Street. Performances are Wednesdays through Fridays at 7:30PM; Saturdays at 3PM and 7:30PM; and Sundays at 3PM. No shows on November 24th and December 25th.  Tickets are $55 Orchestra, $39 Rear Section, $27.50 group rate for 10 or more, and $19.50 Student Rush with student ID 1 hour prior to curtain. To purchase tickets visit SohoPlayhouse.com or call OvationTix on 866.811.4111)