Reid Farrington's A Christmas Carol or Dickens: The Unparalleled Necromancer

Created and directed by Reid Farrington 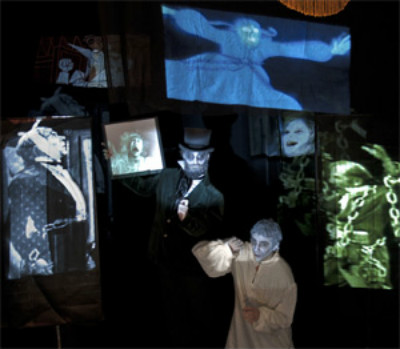 BOTTOM LINE: Ghosts of Christmas Carols’ past are beautifully and effectively strung together in this multi-media’d, festive feast.

Charles Dickens’s Christmas Carol, it would seem, has been performed, passed on, and altered nearly as many times as the years it has been in existence. So imbedded is Dickens’s tale within the widespread and commercialized Christmas culture, that even for those whose celebration of the holiday is limited to mass consumption of candy canes and eggnog lattes, an overview of the larger plot points comes quickly and easily. Reid Farrington has submerged himself in this bog of Carol tellings and re-tellings to put together what can only be described as a visually cacophonic Christmas Carol overview, to great effect. The fruit of so many Christmases past and Farrington’s extraordinary piece, A Christmas Carol or Dickens: The Unparalleled Necromancer, is now showing in its world premiere at Abrons Arts Center Henry Street Settlement.

With some bits spoken, many bits mouthed to film-version voice-overs, and all physically performed in front of or behind projection screens, the dexterous cast flits between Carol characters and time-periods to tell the entirety of the familiar fable. Each scene consists of layer upon layer of repeated lines from the Carol canon, with each different intonation reflected in the actors in a different physicality, resulting in an exhausting but ever-pleasing tale torrent. With good, old Ebenezer Scrooge represented as everything from the classic pinch-faced miser to the sarcastic Scrooged Bill Murray to Michael Caine’s Muppet-thronged moneygrubber, Farrington’s survey hits all the bases to ensure the most emotionally evocative conglomeration of stories possible. Though, of course, it is the actor’s lightening-quick embodiment of this character-blitzkrieg that serves to be the most stirring.

Mesmerizing, too, is the incredibly finely edited projection material that illuminates the story and many of the characters via silkscreen frames and moveable stage-legs. The unbelievably inexhaustible archive of Carol clips that grace the stage throughout the performance are worth the price of admission alone. And while some clips and cuts cannot help but miss their targeted on-stage silk screens due to the chaotic dance constantly taking place, when marks are hit perfectly they come with a delicious pang of delight.

In addition to tapping into the ever-so culturally familiar tale to tease and toy with expectation, Farrington plays with the boundaries of live performance. Much like in his, Gin & “It”, which played last year at 3LD and PS122, which combined live-action narrative with projections from Alfred Hitchcock’s film, Rope, Farrington’s way of pushing the live theatre envelope is clever and fun. The line between the film pieces and the actors is not so much blurred as non-existent. The “reality” of the performance taking place on stage is wonderfully bent and skewed, distorted to the point that live applause at the end sounds tinny and unreal.

Never bordering on film reenactment, A Christmas Carol, instead plays at reappropriating film for the stage. In his quasi-Brechtian way, the audience is kept at a distance by being fully familiar with, or at the very least aware of, the material being utilized, and with that comfort-zone of no dramatic surprises, Farrington is then able to allow the audience to playfully delve into the traditional lineage. Whether the takeaway is simply holiday enjoyment, or a deeper assessment of the English classic’s sturdy foothold in Christmas culture, both are secondary to the impressiveness of the production, but the options are certainly available.

(A Christmas Carol plays at Abrons Arts Center Henry Street Settlement, 466 Grand Street at Pitt Street, through December 18, 2011. Performances are Thursdays at 8PM; Fridays at 8PM; Saturdays at 8PM and Sundays at 4PM. Tickets are $20 ($10 for students and seniors) and are available at ovationtix.com or by calling 866.811.4111.)