Brew of the Dead II: Oktoberflesh 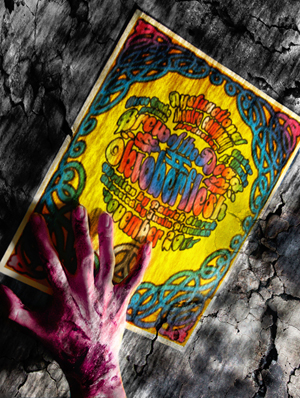 BOTTOM LINE: A play about zombies that is really more of a zombie tease, peppered with contemporary cultural references.

Brew of the Dead II: Oktoberflesh, the latest production from Dysfunctional Theatre Company, is the follow-up to the 2008 production Brew of the Dead. While the prequel explored the question, “When the Apocalypse comes, will there be beer?” Oktoberflesh proclaims to ask “Can the dead get high?”

The tag line, however, is not exactly relevant to the actual play, which is much more about the living than it is about the dead and is richer in references to Facebook and Twitter than to marijuana or other intoxicants. At no point does a zombie actually get high, so the proposed question is never really addressed. This isn't necessarily a problem and it doesn't effect the actual experience of the show, but it is indicative of the show's sloppiness, which comes through in other ways.

The plot follows a small motley crew of dorky individuals who have managed to escape the impending zombie apocalypse (for now). The characters range from Arnold (Eric Chase), an uptight walking encyclopedia of a man, to Claire (Amy Overman), a strong-willed and commanding woman. Paulette (Amy Beth Sherman) is a sassy girl who spends a lot of time gossiping on her cell phone. Lazlo (Tom O’Connor) is a stoner who works at the bowling alley where the group spends the first act of the play holed up from the zombies. The performances, overall, are decent, as the characters embody their individual archetype without wavering. These characters themselves, however, are somewhat flat and, at least to me, not all that appealing. Perhaps this stems from a desire to depict that in the zombie apocalypse you don’t get to pick your friends but, regardless, I didn’t feel particularly attached or invested in any of the characters.

The plot is loose and insubstantial and doesn't make a lot of sense (which, admittedly, is not necessarily a first when it comes to zombie stories). The first act takes place in a bowling alley where the characters discuss strategies to escape the zombies who are pounding on the door and obsess over their inability to connect to their social media on their smartphones. Eventually they decide to put on a music festival, called Oktoberflesh, as a means of getting all of the human survivors together in one place. The second act takes place backstage at the festival, where they continue to obsess over social media and try to keep their audience from getting restless.

The Brew of the Dead series is not the only instance of zombies rising as a new trend in theater. In the past six months alone, I’ve seen three plays about zombies (including this one) and missed several more. While the required effects for telling zombie stories through film have long been mastered, effectively recreating them on stage is a whole different challenge that typically involves fight choreography, heavy makeup and fake blood that spurts, splatters and streams on stage. For me and (I suspect) many other people, this is the main draw for seeing a play about zombies.

Aside from a zombie-on-a-leash (Nicole Lee Aiossa) who sits on stage grunting and hissing for much of the first act, it is not until the final ten minutes of the show that the promise of zombies really pay off. This is also the time when Stephanie Cox-Williams’ “gore” effects truly get to shine. Cox-Williams seems to be carving a niche for herself in the New York low budget theatre scene by creating the kind of blood-and-gore effects that define zombie stories -- and she does it incredibly well.

The show isn’t un-enjoyable, but it certainly isn’t what it's advertised to be. Chock full of references to pop culture and contemporary technology, Oktoberflesh is more likely to appeal to people who have a finger on the pulse of mainstream American living than those who really geek out on zombies. A joke that alluded to Courtney Stodden’s Twitter feed, for instance, went right over my head until my companion pointed it out to me after the show. This also suggests that timeliness of humor is a major priority with Oktoberflesh which probably explains why it feels undefined in other ways. With so many jokes that would only be funny today, it's hard to imagine this play ever being produced again.

(Brew of the Dead II: Oktoberflesh plays at Under St. Marks Theater, 94 St. Marks Place, through November 19, 2011. Performances are Thursdays through Saturdays at 8PM. Tickets are $18 or $15 for students and seniors and are available at smarttix.com or by calling 212.868.4444. For more show info visit horsetrade.info.)