The Berenstain Bears LIVE! in Family Matters, the Musical

By Michael Borton and Michael Slade; Directed by Devanand Janki 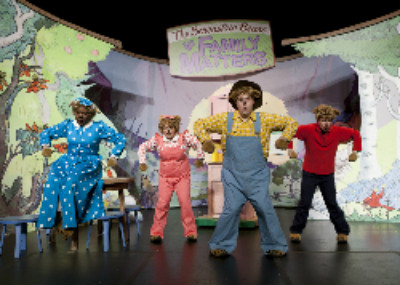 BOTTOM LINE: The Berenstain Bears is an excellent opportunity to introduce little ones to theater in a friendly, familiar manner.

It’s been many years since I’ve taken a visit to Bear Country. The children in my life are either a bit too young, or way too old for the beloved series of children’s book to play into my life, but returning for a visit via the new children’s musical, was an hour of pleasant nostalgia.

For those who aren’t familiar, The Berenstain Bears is a series of hundreds of books for young children that follow the action in Bear Town and the lives of one quaint little bear family in particular. Much like eighties sitcoms, each book always has a moral lesson and a neat little bow to tie up the story by the end. In this particular tale adapted for the stage, Sister learns not to talk to strangers, Brother learns to focus on school and Papa learns too much junk food will make him “fluffy.” There is nothing new or innovative in the plot, as is typical of children’s theater, but it is well produced and nicely put together.

Director Devanand Janki deserves accolades for directing and choreographing the show in a manner that keeps the little ones in the audience interested, without resorting to cheap tactics or colossal production values that many of the large touring shows geared towards children that go through Madison Square Gardens and Radio City seem to need. The focus of the story is always clear and transitions run smoothly with no chance to lose the attention span of the audience; a necessity in children’s theater.

Although largely a wholesome experience, The Berenstain Bears isn’t for every kid. Since the plot is based on three of The Berenstain Bears books from the mid-eighties, some of the material seems a little narrow for modern children and their parents. Traditional gender roles are firmly in place. Brother plays soccer, along with his male cousin, while Sister cheers them out. Father goes to work and mother takes care of dinner and the children. Additionally, much of the show strongly focuses on the idea that no one wants to get “fluffy” and the dangers of junk food, however children pass a vendor stand selling nothing by sugary sweets and candy on the way in, which seems somewhat hypocritical. I kept expecting to see a mortified child in the audience toss a lollipop after being told for the eighth time that if they ate too much junk, they’d split their pants.

Perhaps the best gauge of the quality of this production was the engagement level of the children in attendance. I myself took a two and a half-year old as my guest, and he, along with the vast majority of two to eight year olds in the theater with us, remained well behaved and largely entertained for the duration of the fifty-five minute show. Parents, nannies and grandparents looking for something different to do with their little ones will find The Berenstain Bears a good use of their time, although it is certainly exclusively children’s theater, and adults shouldn’t go expecting it to be fulfilling for them also. The show is likely best for four to seven years olds and I strongly recommend that audience members avoid the second row, as it is the only one that isn’t on risers, and therefore very, very difficult for kids to see over those in front of them.

(The Berenstain Bears LIVE! in Family Matters, the Musical plays at the Marjorie S. Dean Little Theatre, 10 West 64th Street, in an open run. Performances are Saturdays at 11AM and Sundays at 2PM. Tickets will be $40-$44. For more show info and to purchase tickets, visit berenstainbearslive.com.)