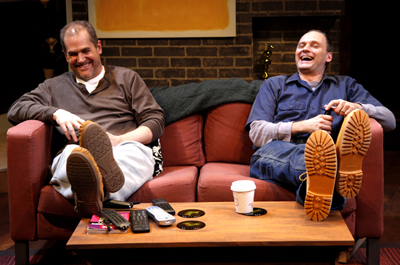 Paul Michael Valley and Michael Mastro in ANY GIVEN MONDAY. Photo by Carol Rosegg.

BOTTOM LINE: A poignant, funny, and emotionally intense play that explores the limits of loyalty, fidelity, and love.

Imagine learning that your best friend, someone you’ve known since childhood, has committed a crime so heinous that every legal system in the world would punish it? What if your friend claims that he did the deed not just because he wanted to, but because he also thought it would improve your life? Do you turn him over to the police or does loyalty require you to stay mum, no matter what? How about if blame shifts to a 17-year old kid with a criminal record but no ties to you or your pal? Do you speak up then?

These dilemmas form the crux of Any Given Monday, Bruce Graham’s disturbing, if at times hilarious, 2010 Barrymore Award-winning Best Play. Witty and provocative, the script explores not only how we rationalize — or condemn — serious offenses, but also how we normalize behaviors that may not be criminal but are nonetheless violations of decency, including racism, homophobia, sexism, anti-Semitism, and contempt for the indigent and disenfranchised.

The play centers on Lenny (Paul Michael Valley), a middle-aged English teacher who has been married to Risa (Hillary B. Smith) for 24 years. Basically paralyzed by indecision and a desire to keep the peace, he is easily pushed around by his wife, daughter, and friends.

This perceived weakness annoys Sarah (Lauren Ashley Carter), Lenny and Risa’s college-aged child, an articulate, sassy, over-achiever who is studying philosophy and grappling with the moral and ethical conundrums that have kept theorists scratching their heads for centuries. As Sarah struggles to navigate the theoretical terrain of right and wrong, she finds herself face-to-face with her parents' unraveling marriage and quickly ascertains that their conflict cannot be easily resolved. Her angst — coupled with arrogant, youthful zeal — is perfectly presented.

Mickey, played with stunning intensity and wired energy by Michael Mastro, is Lenny’s closest friend and the pair routinely watches Monday Night Football together, a ritual that involves screaming at the TV and guzzling beer. On the particular evening depicted in Any Given Monday, Mickey confesses that he has done something to “help” Lenny rekindle Risa’s affections. Suffice it to say a gun was involved.

Mickey is a 21st century Archie Bunker, a white, working-class transit worker who rails against other cultures and races. Unlike the more educated and reserved Lenny, Mickey is brash, loud, and quick to act. He’s filled with fury, deeply aware that his way of life is under assault, that rich real estate developers are destroying communities like his for profit. He’s resentful and longs to do something to voice his feelings.  While he’s not known for deep thinking, Mickey is unabashedly supportive of his friends and family and, since we never see Lenny challenge his friend’s assumptions, we can presume that Lenny generally agrees with Mickey’s worldview.

But now a crime has been committed. When Sarah accidently discovers Mickey‘s transgression, she joins her father at an ethical crossroads. It’s a rough place and each of them has to decide whether to report Mickey to the authorities or remain silent. Needless to say, it’s a quandary that neither takes lightly.

Graham’s penchant for sharp dialogue and heartfelt monologues is flawless. Rich language, coupled with deep insights into the disappointments and joys that occur in all meaningful relationships -- whether romantic or platonic -- is presented without sentimentality.  Furthermore, the play avoids homiletics as Lenny and Sarah ponder the implications of what has transpired.

As conversations unfold, Dirk Durossette’s set, the den of Lenny and Risa’s home, suggests comfort but not opulence and easily transforms from a male haven into a lair for the processing of marital discord. It also serves as a space for parent and child to have a wholly adult conversation, perhaps the first of their lives.

Any Given Monday showcases the collision between everyday crimes — bullying, prejudice, and gentrification, among them — as they intertwine with major crimes, and leaves the audience to determine which are actually more horrifying and destructive.