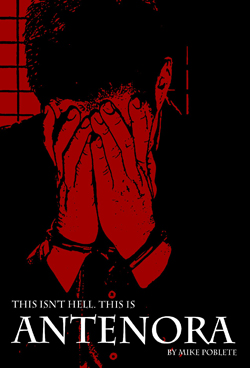 BOTTOM LINE: A two-man show that explores the psychological experience of being in a political prison that tortures its inmates.

Antenora gets its title from one of the layers of hell described in Dante’s Inferno. The two-man play, written by Mike Poblete and having its U.S. debut this month as part of the Planet Connections Theatre Festivity, is certainly set in a layer of hell-on-Earth: a cell in a dangerous political prison.

The play follows two men as they navigate the many challenges of living in shared isolation, the monotony only broken by bland meals, delivered by a gloved hand (arguably the third character), and regular torture sessions (called “treatments”). The men (who withhold their real world names) oscillate between anger and acceptance and, by partaking in shared fantasies and imaginary activities, develop an odd and intimate relationship that comes from sharing a painful present and an uncertain future. Kiss of the Spiderwoman is an inevitable comparison and perhaps even an (uncredited) inspiration for the story.

Antenora is presented by Backyart Productions and proceeds benefit Amnesty International, which makes sense given the “fight the injustice” focus of the show. The story intends to give the audience a glimpse of just how awful the lives of political prisoners can be and, in doing so, can be kind of difficult to watch.

Overall, the script could use some trimming -- there are several scenes that almost exactly repeat themselves and, though the intended effect may be to make the audience experience the same trapped feelings as the characters, perhaps theatre isn’t the best venue for that experience. It is also may feel thematically overloaded for some; for me, the Dante references and religious themes in particular slowed the momentum of the more compelling parts of the show.

While the show drags a bit (and ran about 25 minutes over the anticipated 75-minute run time the afternoon I saw it), it is punctuated by some poignant and insightful scenes. The acting is demanding of the two performers, Ben Williams and Max Woertendyke, who pull it off quite well. All things considered, Antenora is at its best when it explores the psychological mechanisms that the two men use to fend off insanity and desperation.