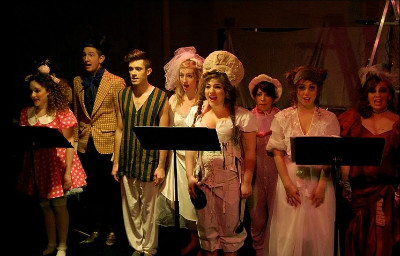 When I took my granddaughter Naomi (aged 10 1/2) to see Alice: A New Musical, I felt a bit as if we were about to descend into a rabbit hole ourselves. We were eagerly anticipating what we were about to see, more than willing to suspend our disbelief, and yet fearful that we might be disappointed by a limited off off Broadway interpretation of the book by Lewis Carroll that we both knew and loved so well. In my experience, off off Broadway plays, particularly adaptations of classics, are notoriously uneven: a few are delightfully creative productions but many others turn out to be pale imitations of the original works upon which they are based.

But in this case we really lucked out and emerged from our descent into the rabbit hole with broad smiles on our faces that would have done the Cheshire Cat himself proud. To be sure, Andrew Barbato and Lesley DeSantis (co-writers of the book, music and lyrics), in squeezing Carroll’s opus into a one-hour stage production, omitted many of Carroll’s best scenes. I must admit that if I had my druthers, I’d have preferred to have seen the play expanded to two hours, with even more of Carroll’s original work preserved. But given the time constraint, what remains is relatively true to Carroll’s book. There is Alice (Rocio Del Mar Valles) and her sister (Ashley Dawn Mortensen), the Queen of Hearts (Rachel Bahler) and the White Queen (Lizzie Klemperer), the Mad Hatter (David R. Gordon) and the White Rabbit (Cameron Perry), Tweedle Dum (Joe Chisholm) and Tweedle Dee (Devon Stone), all dutifully appearing on schedule to entertain an entranced audience.

The music, book, lyrics and costumes are all enjoyable and the entire company’s singing is truly exceptional. The set is as close to minimalist as you can get but Andrew Barbato (who not only co-wrote and directed but is the set designer as well) is more than up to the challenge. He sets a tall ladder on its side, adds a box, a wheel and a scrap of cloth, and voila! – there is the ship adrift on Alice’s sea of tears. He angles the ladder a bit differently and dispenses with the box, the wheel and the cloth – and there is the entrance to the rabbit hole. He stands the ladder upright as Alice ascends and descends, and the audience shares her magical shrinkage and enlargement.

Barbato and company take one small liberty with Carroll’s book, and that is all to the good. Here, Alice is a thirteen-year-old girl who, lest she be forced to grow up too fast and abandon her youthful imagination, runs away from home and embarks on her adventure on the very day scheduled for her birthday party. By portraying her in this manner, Alice: A New Musical manages to deliver a couple of worthwhile messages to the audience (as well as an hour’s entertainment). To wit, becoming an adult doesn’t have to mean totally relinquishing one’s childhood; one’s own mother is seldom as bad as her daughter might make her out to be; mothers have problems of their own too; and when all is said and done, both mothers and siblings (even big sisters!) are still worth having around.

(Alice: A New Musical plays at the June Havoc Theatre, 312 West 36th Street, 1st Floor, between 8th and 9th Avenues. Final performance is Saturday, July 30th at 11 AM. Tickets are $18 adults, $15 students/seniors and can be purchased at www.MidtownFestival.org or by calling 866-811-4111. For more information visit www.alicemusical.com.)