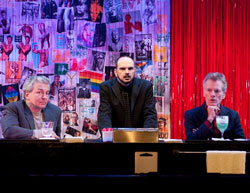 BOTTOM LINE: A sharp-witted dramedy that speaks of this discord between older and younger generations of gay men.

Walking into the theatre one sees silhouetted beings casually sipping drinks and chatting amidst the disco music that emanates from the juke-box of a festive gay bar decorated for the holidays. Now, one may ask, what gay bar these days has a juke-box? Others may ask...what is disco? These questions undoubtedly are raised by a younger generation more familiar with Pandora Radio as the source for accessible pop music. This is the precise discord that Grant James Varjas addresses in his doleful new play, Accidentally, Like a Martyr -- the generation gap between gay men.

Playing at the Paradise Factory on the Lower East Side, the play is effectively staged in the same neighborhood in which its story takes place. The story begins in a gay bar whose bartender is noticing a bit of competition from a rival bar that has recently opened around the corner and appeals to a decidedly younger crowd. The bar where the story takes place is reminiscent of Cheers in that everybody knows everybody's name, and the bar-flies are old enough to have actually watched the original Cheers episodes; however the jovial manner of the sitcom is not translated to the stage. The inhabitants of this bar are far more caustic and acid-tongued, and to put it simply, bitchy.

This does not come across as a stereotype of old queens tossing back catty comments as they toss back their drinks, but is reflective of a discontented generation that has fought a battle only to be sidelined on the victory day. There has been undeniable progress since 1969 when the Stonewall riots ignited a fire in the gay community; and victories, such as New York state's legalization of gay marriage, are huge. However, such institutions would not be in place were it not for earlier generations of gay men paving the way for younger generations so we may enjoy the freedoms we have today. Varjas's play provides a poignant commentary on the divide that is evident between generations of homosexuals. The commentary usually comes from the elder generation in the form witty observations and heart-felt arguments that effectively play to both sides of the generation gap.

The play jumps between 2007 and 2011 as the recent past greatly informs the present mood of the bar. But these shifts in time are unclear, thus never giving away too much information to spoil the sullen mysteriousness onstage until the final moments of the play. In attendance are an aging pair of regulars comprised of the sharp-tongued Charles (Keith McDermott, who delivers each cutting remark with a keen and calculating precision that echos a downtown Oscar Wilde or Noel Coward), and the disenchanted writer Edmund (the endearing Chuck Blasius, still clinging fondly and earnestly to his optimism). As writer/director, Varjas gives a twitchy and fraying performance as Brendan, a regret-filled coke-head who is stuck in the middle of the generation gap: not quite old enough to commiserate with Charles and Edmund yet not quite young enough to identify with the Facebook (or Grindr) generation either.

The playful bartender Jeffrey (Brett Douglas) provides a younger voice for the piece. Douglas fills the role nicely delivering the almost-naive jokes with an appropriate youthful and occasionally spritely demeanor. The mundane happenings in the bar are upset when a strange and new outsider, Mark (Cameron Pow) enters the bar unintentionally needling at the touchy past of the bar-flies as he seeks to reconcile his own past. Pow plays the mysterious Mark with a sincere pang of loss that is echoed by every character on stage.

Clifton Chadick offers a behind-the-bar perspective to his set, which adds another dimension to the story and effectively keeps a distance between the audience and the characters that is reminiscent of the emotional distance the characters keep from each other. Accidentally, Like a Martyr gives a fresh voice to the growing body of gay-themed plays, and brings a seldom discussed problem to the stage in a way that invites a conversation from all generations. Varjas's direction is thoughtful, and he writes with a finesse that juggles sarcastic humor and sincere concern. Accidentally Like a Martyr is just like the drinks being imbibed at the bar -- a strong mixture of sweetness and bite, that is never watered down.