A Theasy Interview with Josh Luxenberg, curator of the Flint & Tinder theater series at The Tank 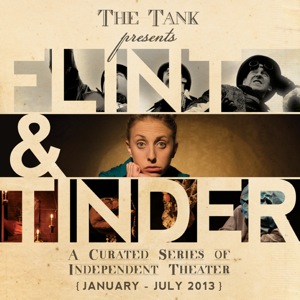 THEASY: Tell us about The Tank...who are you and what are you all about?

JOSH LUXENBERG: We provide free performance space to emerging artists. That’s the simple answer. Our curators work in eight disciplines, including theater, music, dance, comedy, film, and more. The whole idea is to provide a space for artists who are trying new things, pursuing new ideas, and who might not have the kind of capital it takes to rent a theater in Manhattan.

THEASY: When was The Tank founded?  What was the impetus?

JL: The Tank was founded in 2003 by a group of artists and their friends (including Alex Timbers, Amy Herzog, and Justin Krebs) who wanted to address the issue of cost for young artists. This month is actually our 10th anniversary!

THEASY: What is Flint & Tinder?

JL: Flint & Tinder is our flagship theater series. We focus on artists who are a bit further along in their development and who are ready to open their work up to wider audiences and reviewers. We choose work that mixes all sorts of different styles: physical theater, clown, puppetry, music, and some stuff that can’t quite be categorized. But for all that, the primary criteria is: does this intrigue us? When an artist who we love says “Hey, I’ve been working on something new, and I’m not quite sure what it is...” that’s when we get interested.

THEASY: Your next offering is The Curious Case of Phineas Gage...what is the show about and why should audiences check it out?

JL: We’re super excited for Phineas Gage. Split Knuckle Theater is kind of company that can make magic out of nothing. The real Phineas Gage was a railway worker who got a spike through his brain and lived, but his personality was noticeably altered. It was basically the beginning of modern neuroscience. SKT has used this story as a jumping-off point to create a crazy story about science, pseudo-science, and mythology. It totally tickles our Victorian steampunk funny bones, and it’s brand new stuff. SKT’s Endurance (the story of an office worker during the recession intertwined with an adventurous retelling of the Shackleton expedition to the Pole) was one of The Tank’s biggest hits in 2010, and this show is bound to be one of the highlights of the season.

THEASY: What's next for The Tank? What are the future goals?

JL: We’re right in the middle of planning for the next season of Flint & Tinder — scouting shows, talking to our artists from this season to get their feedback on their experiences, evaluating. We’re always adjusting the way we work to make sure we’re supporting our artists and audiences. We’ve starting to bring in some funding (thanks to the folks over at the Jim Henson Foundation) to establish a residency program as part of the series. We’ll be able to cover some rehearsal and development costs for one or two of our shows for the first time in The Tank’s history.