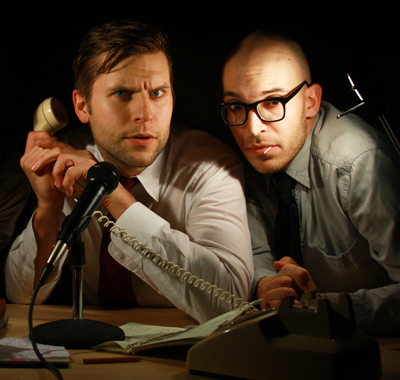 How did The Mad Ones begin? Who are the powers-that-be?

Joe Curnutte: We all got together in 2009 when Marc Bovino submitted a short novella he and I had written together to be presented at The Brick Theater’s Anti-Depressant Festival as spoken word. When it was miraculously accepted, we decided that in order to make this into a play that we would actually be proud of, we needed to assemble people smarter than us. We got in touch with Lila [Neugebauer], Stephanie [Wright Thompson] and Dramaturg Sarah Lunnie, and went down to Louisville to have a shotgun workshop. The little novella, which was about two brothers who were in love with the same girl during a robot invasion, eventually became Samuel & Alasdair: A Personal History of the Robot War. Today our co-artistic directors are: Marc Bovino, Joe Curnutte, Lila Neugebauer, and Stephanie Wright Thompson.

Marc Bovino: We also now have company members Michael Dalto, who plays Tumbleweed in this show and has been our musical director for both full-length projects, and Stowe Nelson, who is our Sound Designer guru.

What is your company all about and what does your name signify?

JC: To me, The Mad Ones means that we are all sort of bonkers -- in a good way. I think we are all interested in doing work that is unique and that breaks a few rules. We love old fashioned storytelling but want to package it in a way that is digestible and interesting to modern day audiences. What is especially mad about the way we work is that when we decide to do a piece we have absolutely nothing to start with except for maybe a picture, or a song, or a concept that has been rattling around in one of our heads for a while. It is only when we all get in a room with one another that anything is really created. The name itself comes from a jack Keruoc quote: "The only people for me are the mad ones, the ones who are mad to live, mad to talk, mad to be saved, desirous of everything at the same time, the ones who never yawn or sway a commonplace thing, but burn burn burn like fabulous yellow roman candles exploding like spiders across the sky."

MB: I will just default to our newly minted company artistic statement: We are a collaborative theater company that devises new work through a combination of automatic writing, in-depth dramaturgical research, and structured improvisation. As a company, we investigate cultural memory and nostalgia. We create immersive, highly detailed theatrical experiences through which the audience comes to invest in the emotional lives of the characters. We generate productions through the collaboration of a core creative team, with actors, designers, and director all having an essential hand in what a piece ultimately becomes.

How have you contributed to the New York theatre scene in the past...and what do you intend to accomplish in the future?

MB: Over the past 2 years The Mad Ones have become active contributors to the downtown theater scene by creating two full length works Samuel & Alasdair (The Brick, Ars Nova, The New Ohio Theater) and The Tremendous Tremendous (The Brick) and one ten minute [play] Inspector Pennywhistle and the Nefarious Case of the Sweet Shop Murder, commissioned for Clubbed Thumb's Hot Dish 2010. We are planning on entering the laboratory again this coming spring to begin work on our next piece.

JC: Ditto what Marc said. And I think we can also add some panache. Is that the right word? Panache?

What excites you most about your upcoming production, Samuel and Alasdair?

MB: I'm most excited about sharing this production with a new audience that maybe didn't make it out to The Brick during our first run.

JC: When I walked into the theater after the designers had been exercising their genius, I was floored. It is ridiculously exciting to show this play to a new audience, like Marc said, but the re-imagined design kicks everything up a notch. Jessica Pabst (Woodshed Collective) has assembled incredible costumes, Laura Jellinek (Buddy Cop 2) has created a remarkable set and environment, Mike Inwood (whose work can be seen all over this fair city) has made dynamic lighting hoices, and Stowe Nelson has made his NYIT Award winning sound design even better -- which I did not think possible.

Samuel and Alasdair had an acclaimed run in 2010...why are you re-mounting it? What has changed for this current production?

JC: The design. We have also changed a few moments here and there. People who have seen the show and know it well will be in for some surprises.

MB: The design. It’s beautiful! And we were invited to remount the piece as part of the inaugural season at The New Ohio Theatre -- and timed to coincide with APAP/NYC (Association of Performing Arts Presenters). Though the first run of Samuel and Alasdair sold out, we felt the show’s life was too short; so the chance to present this show again -- at a downtown institution we're such fans of -- was too good to pass up.

What is The Mad Ones' ultimate goal? Where do you see the company in 5 years? 10 years?

MB: Our ultimate goal is to be a fixture of the downtown theater scene making work that challenges us as artists and our audience without being elitist or alienating. And above all it is about having fun while doing it. It's theater. We aren't changing the world but we'll show you a good time. In a world of increased globalization and online alienation, we need to maintain arts communities that are local. That's why people come to the city and if it gets swallowed up by increased commercialization and the desire to reach millions online, New York will have lost what makes it great -- it's local artists.

JC: In the immediate future I would love to share this piece and others with as many people as possible, maybe even build a cult-like following. Only we would be a happy and supportive club that believes in parties and non-altered Kool-Aid.