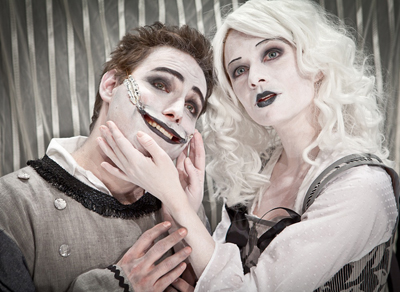 1. Tell us a little bit about Stolen Chair. How long has the company been around? Why was it formed?

Stolen Chair is a theatre laboratory dedicated to the creation of playfully intellectual, wickedly irreverent, and exuberantly athletic original works. We're now in our 10th season. We've got a theory that non-profit season years are like dog years: we're feeling pretty darn old...in the best way possible! The company was originally founded as a vehicle for collaboration for Kiran Rikhye (our resident playwright and my Co-Artistic Director) and me, partners in art and in life. All of our work since then has been written by her, directed by me, and collaboratively created by a magical group of actors, designers, musicians, and dramaturges.

2. Who are the powers-that-be at Stolen Chair?

Those powers be Kiran (texts), me (direction), and Aviva Meyer (management and media). We all met in undergrad at Swarthmore College. One of the things I love about how we run the company is that we've all got fingers dipped into each other's pots; Kiran has a hand a management, Aviva gives me staging notes, and I'm always peering over Kiran's shoulder while she's writing. And beyond this core trio, our company members (David Bengali, Liza Wade Green, Cameron J. Oro, and Emily Otto) have a vital role in shaping both the artistic vision of the company and the philosophies behind our collaborative model.  We've also got an extremely involved Board of Directors and a wide network of associated artists who each, in their own ways, help us keep our integrity and challenge ourselves as a company.

3. What types of plays represent your aesthetic?

We are, to coin a phrase, "aesthetically promiscuous."  New York Press has called us New York's "best genre-bending theatre." Our works have hopped styles from rhyming couplet masked satire (Commedia dell'Artemisia) to pseudo-Elizabethan blank verse sex farce (Stage Kiss). We've taken audiences to an imaginary Weimar nightclub where adults play like children and customers pay to watch (Kinderspiel) and to the strangest recesses of the multiverse (Quantum Poetics). We've fused '40s noir with Ionescoan absurdism (Kill Me Like You Mean It) and '30s swashbucklers with Greek Tragedy (The Accidental Patriot).  We've even given the theatre a vaudevillian funeral (Theatre is Dead and So are You).

4. Your latest production, The Man Who Laughs, opens this month. What is this play about and what can audiences expect?

The Man Who Laughs is billed as a live silent film for the stage. Freely inspired by Victor Hugo's novel of the same name, it tells the hilarious and heartrending story of Gwynplaine, a clown whose face has been surgically disfigured into a permanent smile. Performing with his adoptive sister and father, Gwynplaine gains fame and a very modest fortune for his comic acts -- and his comical face. Secretly he yearns to be more than a freak and a joke -- but when his yearning leads him into the arms of a debauched duchess fascinated by grin, the results are disastrous for Gwynplaine and for his family. Audiences can expect to step back in time to an era when performers didn't need to speak to pull on our heartstrings and tickle our funny bones. They can expect a one-of-a-kind experience that pairs the intimacy of theatre with the immediacy of film. They can also expect free, freshly popped popcorn. (For tickets, schedule, and more info about The Man Who Laughs, visit stolenchair.org.)

5. What's up next for Stolen Chair?

Right as Man Who Laughs rehearsals kicked into high gear in December, we were at the tail end of an 8-month long run of the Bachelors' Tea Party, a site-specific society comedy presented at Lady Mendl's Tea Salon alongside a 5-course gourmet tea service. The Inn at Irving, the venue that runs the tea salon, has commissioned us to develop a similar theatrical experience for their downstairs martini bar, Cibar. We don't yet know most of the artistic and logistical details, but we know the play will be accompanied by a special tasting menu of custom cocktails created exclusively for the work and that we're trying to get this up and running by the end of April. This August we are also launching Beyond Realism, a three-week-long summer theatre program for high school playwrights, actors, and directors interested in physical theatre. Those details are all online at beyondrealismnyc.com. Oh, and we're still in the middle of an IndieGoGo campaign for The Man Who Laughs: http://igg.me/p/316934/x/711703

Photo: Dave Droxler and Molly O'Neill in THE MAN WHO LAUGHS. Photo by Carrie Leonard.