A Theasy Interview with the founder of Compagnia de' Colombiari

THEASY: Tell us about yourself! What kind of theatre do you make? Where did you study? Who are your influences? 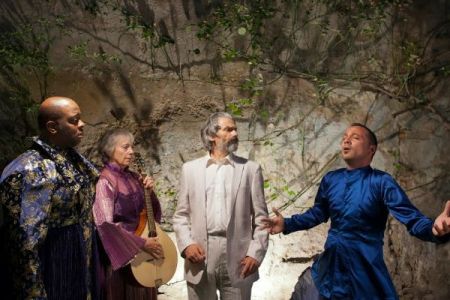 KARIN COONROD: I am a theater artist–director who works in many different areas of theater: classics re-imagined, opera, new plays with the playwright on location, adaptations from non-dramatic sources. I love working with music and movement and bringing the text to surprising new life. The work began in a school for boys -- Christian Brothers Academy in Lincroft, NJ -- where I directed musicals and began working on Shakespeare. When I left the boys' school a 350-seat theater was being built, but I needed to go to Columbia University where I could be at the pulse of the theater world and refine my focus. (Before all of that I was an English major at Gordon College with a theology minor). While at Columbia to my surprise I encountered Liviu Ciulei in my second year who became my mentor. He asked me to assist him giving me a choice of projects, but urging The Bacchae at The Guthrie Theatre where he would be working for 9 weeks in the summer of 1987. I went.  In that summer I started my first company Arden Party working on The Taming if the Shrew and Threepenny Opera ( which I submitted to Columbia to be my thesis project). Liviu taught me many things that summer about poetic space, visual sensitivity, working with actors...

THEASY: When did you begin Compagnia de' Colombari? What's the company's mission?

KC: Compagnia de' Colombari began in 2004 in Orvieto, Italy to create an international stage for the medieval mystery plays for the 21st century. The work gathered artists of all ages, disciplines and backgrounds to create together an itinerant piece which traversed the city of Orvieto on the occasion of Corpus Domini...always finishing in the piazza of San Giovenale with a feast for spectators and performers. Crossing boundaries with surprising essential gestures and fleshing out the text is of the highest concern to any Colombari project (see Colombari.org). In addition to the medieval mystery plays, so far, the projects are:  More or Less I Am (a music theater piece taken from Walt Whitman's Leaves of Grass); the world is round is round is round (a music theater piece taken from Gertrude Stein's The World Is Round); Everything That Rises Must Converge (taken from Flannery O' Connor's story of the same name); Giulia by Andras Visky; in development are: Orfeo in Orvieto (from Monterverdi's Orfeo) and Judith (a new opera-theater piece).

THEASY: What are some of your favorite past projects with Compagnia de 'Colombiari?

KC: I love them all and want more people to see them all. We have taken Everything That Rises Must Converge on the road and plan to again. It is urgent for people to witness. This project is interesting because the spoken text is the actual story spoken verbatim. It becomes a company piece of the first order because the performers are literally dependent on each other for their lines, phrases, words, silences. Our recent tour experience in universities and in New York...was unparalleled.

KC: Orfeo in Orvieto brings Orvietani and American performers together. Instead of traveling to a place and simply opening our box for people to look inside, we go to a place and work with artists on site. Communicating in both Italian and English is of course challenging and consumes much energy but the result when the focus is harnessed is tremendous...much much bigger than the sum of the parts...that is only one aspect of this piece. We are performing in the courtyard of the Palazzo Simoncelli an early Renaissance palace at the generosity of the Petrangeli family. It is so evocative a space that the wall has become a character in the play -- the wall having witnessed so much more than all of us together emerges with text through the Rose vines which cover it. So for instance when the alternate story of Orfeo is told by the Dionysion interlocutor, Andrea Brugnera, some words emerge: "the bloodied stones..."

I have worked with my colleague John Conklin to excise many of the pastoral scenes to get to the heart of the story and the music. Gina Leishman, the arranger and conductor, also has had a say in adding little bits and pieces and cutting a little further. Some of the text I have added comes from Virgil (the description of the house of death) after Orfeo sings the extraordinary aria "Possente Spirtu" (sung by Stephen Salters who plays Orfeo) is spoken in Latin by Andrea Brugnera. And phrases in Italian emerge from the wall...La casa Della morte... More text is added by Ovid when the alternate story of Orfeo's journey is related. The original ending had been a more violent one when first presented in Mantova at the Palazzo Ducale for the academy of men in 1607. Later a decision was made to change the ending from that of the bacchantes ripping apart Orfeo to one of more measured equanimity with Apollo's descent. Yet interestingly, the moresca at the end is closer in spirit to the spirit of the wild bacchantes. Hence since Dionysos is the god of the theater I felt called to interrupt the existing ending with the Ovidian account. We are also including a piece of text (translated into Italian) by Sarah Ruhl: Orfeo's letter to Euridice in hell. Also two sonnets by Rilke are heard in Italian and German....all spoken by Andrea Brugnera. Oana Botez has outdone herself in the designing of the costumes. They are like jeweled characters traversing the beautiful space. Peter Ksander who is making the lights is working with limited electricity to create the story in lights. As I write we are hard at work on this.

We open on July 4th with a banquet afterwards. We expect an international crowd and it is for them we play. I want them to feel they are on holy ground. That is what I want.

KC: Next for Compagnia de' Colombari is working on Judith the Anglo-Saxon opera piece... with development rehearsals in New York at the end of the year. There are other things emerging on the horizon of which I cannot speak at the moment. For sure however we plan another tour of Everything That Rises Must Coverge in the spring and in the fall The World Is Round Is Round Is Round to be played in New York.